Is Harry Showing Signs Of A Backbone ? 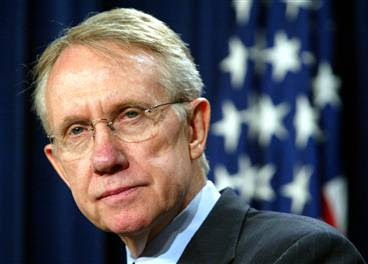 The immigration reform bill has reached the debate stage in the Senate, and the senators are currently debating how many and what kind of amendments will be attached to the bill. This does not mean the bill will ever actually get an up or down vote, since some Republican senator (Cruz? Lee?) will probably filibuster that -- unless the Republicans are able to make the bill so onerous that few immigrants could ever jump through enough hoops to gain citizenship, or delay forever the path to citizenship by making border security requirements unachievable.

And the Republicans have already started their avalanche of "poison pill" amendments. The first was by Texas' sorry excuse for a senator, John Cornyn. Cornyn's bill would put three times as many agents on our southern border, and raise security requirements to a ridiculous level before a path to citizenship could be offered to anyone.

But Majority Leader Harry Reid (D-Nevada) is once again showing signs of finally growing a backbone. He has decided that since the Republicans have used the filibuster to make sure no law could even be voted on in the Senate unless a 60 vote majority is in place, that same benchmark should apply to Republican amendments to the immigration bill. Of course, this has outraged Republican senators (who know none of there divisive amendments could reach the 60 vote level). Reid has answered their outrage by saying:

“How many times have we heard the Republican leader say on this floor and publicly that the new reality in the United States Senate is 60? I mean, this is what he said. That’s why we’re having 60 votes on virtually everything.”


Reid is right. If the filibuster can be used by Republicans to block all legislation they don't like (which is pretty much everything), then it can be used by Democrats to kill the GOP amendments that would destroy immigration reform.

This bill already poses a difficult path to citizenship for undocumented immigrants, and it certainly doesn't need to be made even more difficult (or impossible) by the Republicans. If they don't like the bill, let them vote it down or kill it with a filibuster (if they can) -- and then pay the price for that in the next presidential election (because it is not just Hispanics, but a majority of American voters, who want immigration reform with a path to citizenship).

Does Harry Reid have enough political courage to make his threat a reality? I hope so. But he has shown signs of developing a backbone before, only to back down and turn into a jellyfish. All we can do is cross our fingers and hope he will follow through on his promise this time. Senate Democrats could really use a leader with some backbone.
Posted by Ted McLaughlin at 12:04 AM