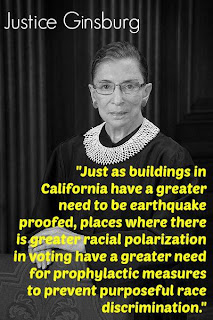 The Supreme Court death a serious blow to the Voting Rights Act in their latest decision (announced on Tuesday). They invalidated Section 4 of that law -- the section that designated the states and localities that must pre-clear any changes to voting laws and procedures with the Justice Department before they can take effect. These localities were designated because they had a history of denying equal voting rights and representation to minorities.

The court threw out Section 4 because they said it was still using 1972 facts to determine those states and localities -- facts that may no longer be a reality. The court left Section 5 intact -- the section that actually calls for pre-clearance. But that section is useless without a designation of what states and localities it is required of.

The court did say that Congress could rewrite Section 4, using more modern facts/circumstances. But any hope of Congress doing that is nonexistent -- because the Republicans (who control the House and have the filibuster in the Senate) are the ones who were trying to get both Section 4 and Section 5 of the Voting Rights Act declared unconstitutional. Now that they have succeeded, they are not going to update Section 4 so that the law can again be both constitutional and effect in protecting minority rights. They will kill any attempt to rewrite Section 4.

And they will do it because they don't want minorities to have equal voting rights -- both because of the large number of racists in their voting base, and because they know that those minorities are not voting for their party (because of the GOP's anti-minority and anti-immigrant policies).

This pretty much leaves the Voting Rights Act as a nice idea, but an idea which cannot be enforced. I know that many right-wingers will claim that the law is no longer needed, but that is simply not true. Racism is alive and well in this country and many of those who pass and oversee voting laws in this country are racist. Their actions will not be as blatant as past actions denying voting rights, but their effect will be the same -- to curtail or deny voting rights to minorities (and other groups that tend not to vote for Republicans).

Any thought that this will not happen (and happen quickly) were dashed within hours of the court's announcement of their decision. Texas Attorney General Greg Abbott has already announced that Texas will re-institute both their old re-districting plan and their unfair Voter ID law -- both of which had been declared to be in violation of the Voter Rights Act, because they discriminated against minorities. Undoubtably, many other GOP-controlled states will follow suit. The Republicans showed with their actions leading up to the last election, that if they can't win voters over they will deny them the right to vote (or at least make it much harder for them to vote).

The court's decision was a giant step backward for equal rights in the United States. It is just sad that the Supreme Court, the institution created to protect citizen rights, is now they tool the right-wingers have used to deny those rights. 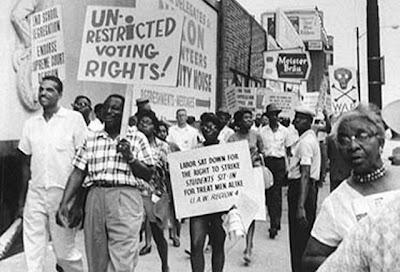