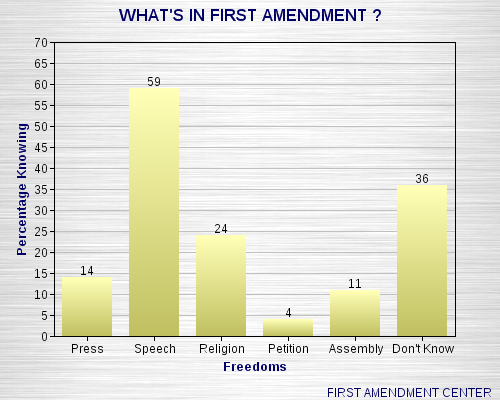 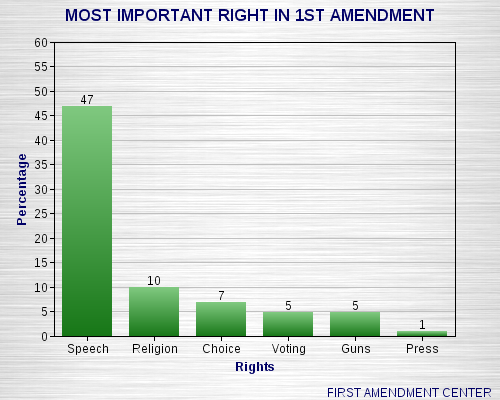 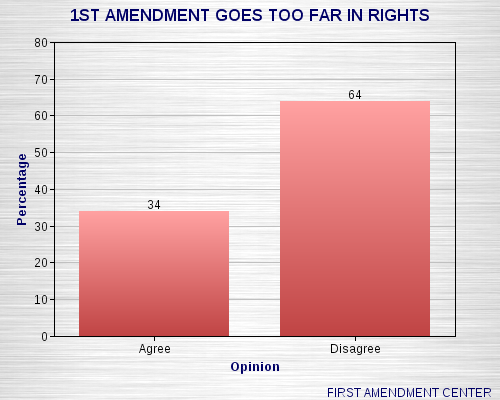 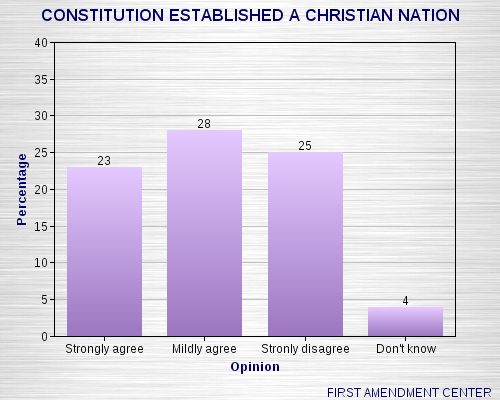 I'm constantly being amazed at the ignorance of far too many American citizens. Significant percentages of the population know very little about our history or the laws that govern us. Since 1997, the First Amendment Center has been polling Americans to see what they know about the Constitution -- specifically the First Amendment (which contains some of our most important rights). This year's survey questioned 1,006 adults nationwide, and has a margin of error of 3.2 points.

I made the charts above from information contained in this year's survey -- and I have to say they show some very disappointing results. Note in the top chart that, when asked what was in the First Amendment, the only right that a majority of Americans could name was freedom of speech, and that was only 59% of respondents that knew that. About 24% knew it contained freedom of religion, 14% knew it guaranteed freedom of press, 11% knew about freedom of assembly, and 4% knew it gave citizens the right to petition government -- and a whopping 36% could not name a single right in the First Amendment.

The third chart gets even worse. Respondents were asked if the First Amendment goes too far in the rights it guarantees to Americans -- and 34% (more than one out of every three) said YES, the First Amendment gives citizens too many rights. I honestly don't know what to say about that. How can any person want less rights?

And all I can say about the bottom chart is that too many Americans evidently have not read the Constitution. About 51% (23% strongly and 28% mildly) say the Constitution established the United States as a christian country. If they had read that wonderful document, they would know that it never mentions god (or Jesus or christianity). And it only mentions religion twice -- first to guarantee freedom of religion (First Amendment), and to say there is no religious test to hold office (Article VI). It does NOT establish this country as a christian nation, and was never meant to do so by the Founding Fathers.

This astounding ignorance of our Constitution and its First Amendment does help to explain one thing though -- why so many idiots have been elected to Congress.
Posted by Ted McLaughlin at 12:04 AM