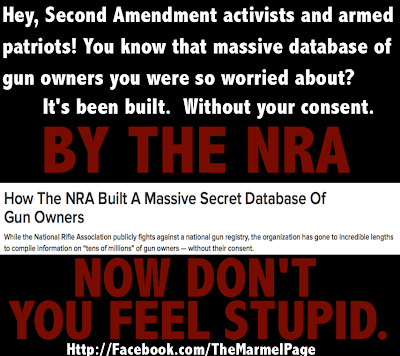 One of the arguments against any new gun regulations that has been made is that it would be the first step toward the government compiling a database of all gun owners, which would make it easier for the government to then start seizing the guns of American citizens. It was a silly argument, but it worked -- because it frightened many gun owners into opposing any new regulation (even such a sensible law like checking the background of all people wanting to buy a firearm).

That argument is now a moot one though. The government doesn't have to compile such a database (if indeed, it ever wanted to do so), because the National Rifle Association (NRA) has already done that.

Now some of you may be saying that the NRA having that kind of database is much different from the government having one. I disagree. Do you really think the government couldn't access that NRA database anytime it wanted to (and probably without anyone knowing it)? The government is already secretly snooping on its citizens (through the internet and phone calls). Tapping into such a database would just be one tiny step further.

We've known that the NRA leaders are not very bright for a while now. But campaigning against a government database of gun owners, and then creating such a database, takes their stupidity to new and dazzling heights.
Posted by Ted McLaughlin at 12:00 AM