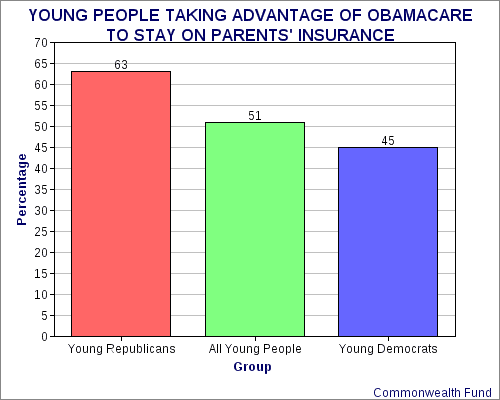 The Republican Party in the House has voted to repeal the Affordable Care Act (Obamacare) at least 40 times now, and huge majorities of the GOP base across the country say they support the effort to repeal Obamacare. A person might logically conclude that these Republicans would be refusing to participate in any of the benefits provided by Obamacare. After all, why would anyone use a law they want repealed?

But that doesn't seem to be the case. One of the provisions of Obamacare lets young people stay on their parents insurance plan until they are 26 years old (if the parents have insurance with dependent coverage). And a new survey done by the Commonwealth Fund (of 1800 adults -- 26% Republican and 28% Democrats) showed that at least 15 million young people (between 19 and 25 years old) are taking advantage of the provision to stay on their parents' insurance. That's about 51% of all Americans in that age group.

Why is the percentage of young Republicans greater than the percentage of young Democrats? The survey doesn't go into that question, but I suspect it is simply because more Republican parents have insurance plans covering dependents. But the reason really doesn't matter much. The fact is that while Republicans may say they are against Obamacare, and would like to see it repealed, they are still flocking to take advantage of its provisions in large numbers (especially Republican parents and young people).

Isn't that more than a little bit hypocritical?
Posted by Ted McLaughlin at 12:06 AM