Has Russia Saved Obama From A Mistake? 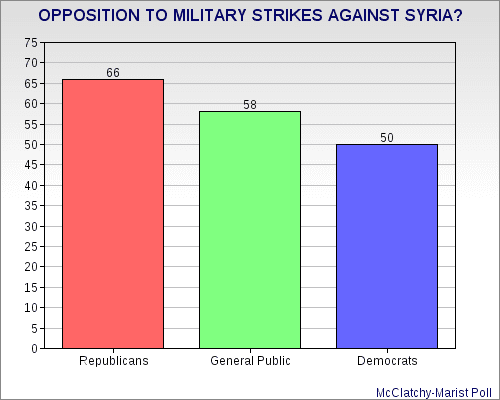 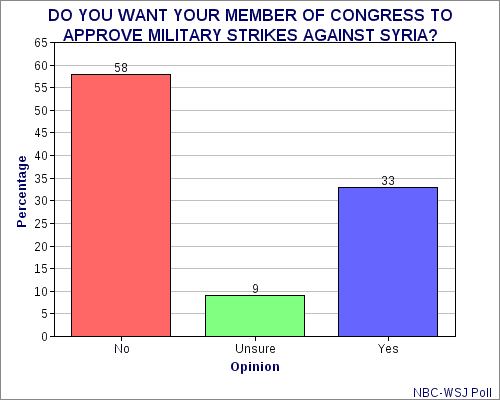 In the McClatchy Poll, 58% of Americans opposed military intervention in Syria (while only 31% are in favor and 11% are still undecided). In the NBC News Poll, 51% said they would be opposed even if the military strikes were limited to missile attacks from Navy ships (while 44% would approve of that scenario and 5% are unsure). But when the NBC Poll asked how they wanted their congressperson to vote, about 58% said they wanted him/her to vote against the military action (while only 33% wanted them to vote to approve it and 9% were unsure).

The president went on cable TV Tuesday night to try and make his case for attacking Syria, but these polls show (as others have shown), he has a tall mountain to climb in getting public opinion on his side.

Fortunately for the president, it looks like an unlikely country may have come to his rescue at the last minute, and saved him from committing a serious mistake (a mistake that could have damaged his reputation and hurt his chances of getting anything done on other fronts in the near future). That country is Russia. Russia has been opposed to any country interfering in the Syrian civil war, and along-side of China, blocked U.S. efforts to get the United Nations to approve an attack.

France and the United States have issued some face-saving remarks about how this must happen quickly, but the truth is that this has (at least for now) removed any justification for an attack on Syria by the United States -- or any other outside country. If the Syrians do follow through on this promise in a reasonable amount of time, that would put immense pressure on the United States to stop any plans to attack Syria (and probably increase the public's opposition inside the U.S. also).

NOTE -- In his speech Tuesday night, President Obama said it's still too early to know if the Russian proposal will work out. But he did ask for a postponement of the vote in Congress.
Posted by Ted McLaughlin at 12:04 AM