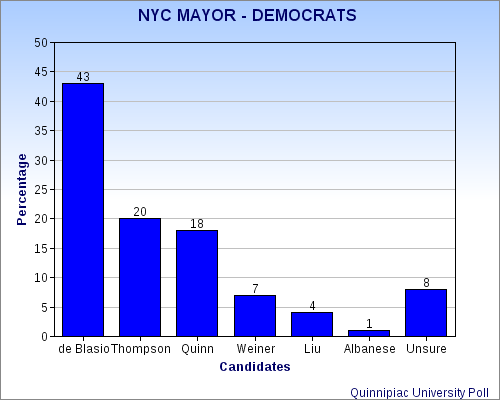 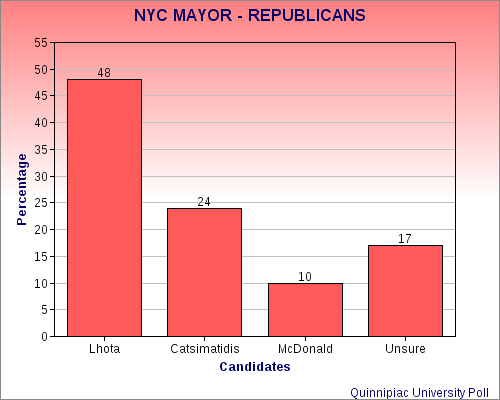 A week ago, Bill de Blasio had jumped in to lead in the Democratic race with 36% (to 21% for Quinn and 20% for Thompson). This latest poll shows he has now extended his lead to 43%, while Thompson has remained steady at 20% and Quinn has dropped another 3 points to 18%. Even if the poll's margin of error is considered, it looks like de Blasio now has a very good chance of avoiding a run-off by getting 40% of the vote. But even if a run-off is needed, the survey shows de Blasio would easily beat either of his closest competitors (with a 30 point lead over Thompson and a 41 point lead over Quinn in a two-person run-off).

This Quinnipiac University Poll, released yesterday, did not include any new numbers for the Democratic primary race for City Comptroller. But that doesn't mean nothing is happening in that race right now (which the last Quinnipiac poll had as dead even at 46% each between Eliot Spitzer and Scott Stringer).

Stringer has been trying to make hay out of Spitzers past dalliances with prostitutes, but last week the Spitzer campaign struck back. They revealed that Stringer had voted in the past to protect the tax-free status of Zymurgy. The problem with that is that Zymurgy is a front for the North American Man Boy Love Association (NAMBLA) -- a group that promotes sexual relations between adults and children. In short, Stringer voted to continue tax-free status for an organization promoting pedophilia. Stringer spokeswoman Audrey Gelman tried to defend Stringer's vote by saying:

“He . . . voted on constitutional grounds that the Legislature should not be freely and subjectively revoking the nonprofit status of groups, (believing) it would be a slippery slope that could lead to targeting of group based on their political views.”


That may or may not be the real reason for the vote, but I can't believe the voters of New York City are going to approve of that. That revelation may be a lethal blow for Stringer's campaign. While visiting prostitutes, as Spitzer did, may not be approved of by voters, it is not nearly as bad as voting to give tax-free status to a group of pedophiles.

Meanwhile, on the Republican side, the poll shows that Joe Lhota leads the mayor's race by a large margin -- doubling the popularity of his nearest competitor, John Catsimatidis (48% to 24%). Lhota has led the race from the beginning, and looks to be the easy winner.

If I was a betting man (and fortunately I'm not), I wouldn't bet against de Blasio and Spitzer at this point -- or Lhota.
Posted by Ted McLaughlin at 12:04 AM