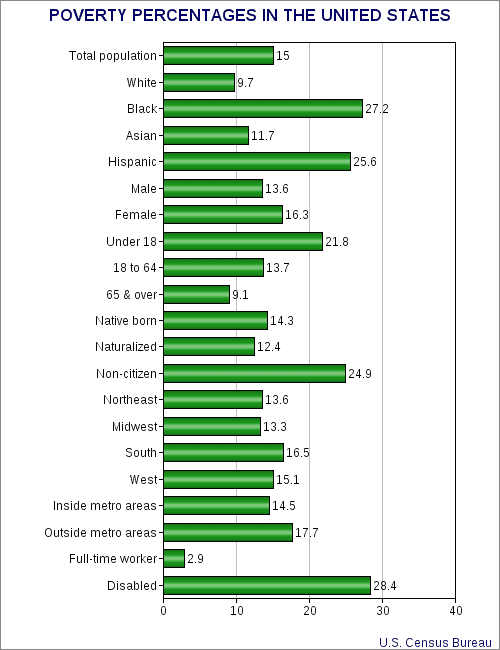 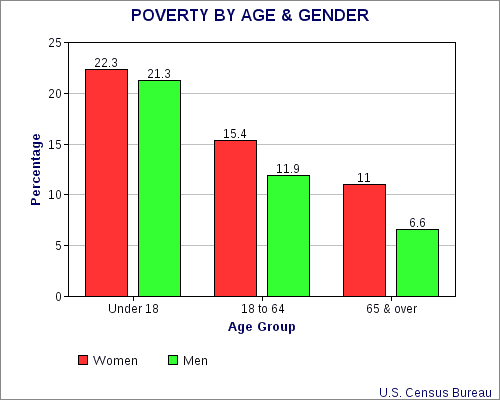 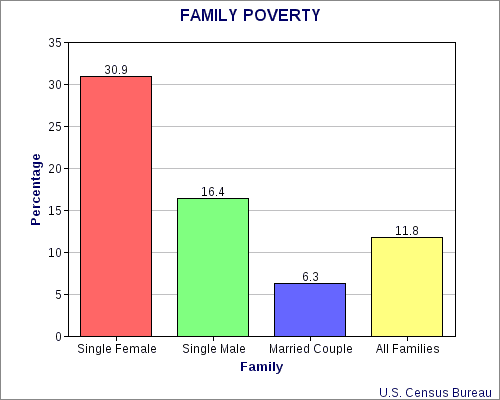 The United States Census Bureau has issued it's latest report on poverty in the United States. The report is for 2012 -- the latest full year for which there are statistics. In 2011, there were 46,247,000 people living below the poverty level. That number climbed to 46,496,000 in 2012 -- an increase of about 249,000 people. That was not enough new people in poverty to raise the official percentage, so it remains at about 15% of the total population -- but it's still an increase, and is indicative of the continuing economic problems in this country.

The top chart shows the demographic breakdown of poverty in this country, giving the percentage of each group living in poverty. Note that the South (where the Republicans are strongest and able to dictate economic policy) is the area of the country with the highest percentage of people living in poverty(16.5%), while the Midwest and Northeast have the lowest levels of poverty (13.3% and 13.6% respectively).

The report also shows that minorities, women, and young people also have high rates of poverty -- and this is especially true of those under the age of 18 (showing that 21.8%, or more than one out of 5 children in America, are living in poverty). In this poor economy, it's definitely better to be a white male adult living outside the South.

The second chart shows poverty by age and gender. Note that in all age groups, there are more women living in poverty than men. The last chart shows the picture of poverty on the family level. While it is too much in all groups, it is by far the worst among families headed by single women (which is not surprising, since this group has the largest percentage of people working for minimum wage or less).

These numbers are inexcusable, even in this struggling economy. All Americans should be ashamed that nearly 47 million people (about 15% of the population) live under the poverty level -- and that the number of those living in poverty continues to grow. This country has the money to significantly lower the number of people living in poverty, but instead of doing that, our politicians have chosen to give that money to the rich and the corporations (the only two groups in this country making record-breaking incomes/profits), and to waste it engaging in unnecessary wars.

Like it or not, this paints a picture of just what kind of society we are -- and it's an ugly picture.
Posted by Ted McLaughlin at 12:04 AM