Syrians Believe War Will Be Prolonged And U.S. Has Chosen Its Side In That War 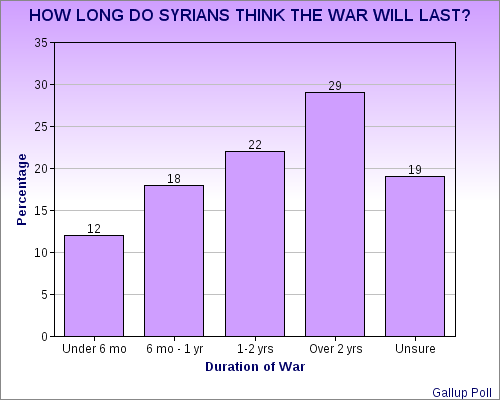 The chart above was made from a Gallup Poll -- taken in June and July of 1,022 Syrians age 15 and older (with a margin of error of 3.4 points). It shows that more than half of the Syrian people think the current civil war tearing that country apart will last more than another year. And 29% (about 3 out of 10 Syrians) will last more than 2 additional years. Only 30% think the war could end in less than a year.

Meanwhile, the United States moves closer to using its own military to attack the Syrian government. Yesterday, the Senate Foreign Relations Committee voted to approve the president's request for a U.S. military strike. The vote was 10 to 7.

The White House says we are not interested in regime change. That's a bit disingenuous, since we've already picked a side in the conflict. Last June, President Obama instructed the CIA to arm and train the rebel forces -- and that has begun. But that doesn't seem to be enough. White House sources are saying the president is unhappy with the help being given by the CIA -- and is seriously considering taking that job away from them and giving it to the military officials at the Pentagon, who he believes could significantly increase the shipment of arms and training of rebels.

This is all very troubling, because Syria poses no danger to the United States, and because of that, we should be staying out of this conflict altogether. Now it not only looks like Congress will allow an attack on Syria by our own military, but the government wants to ramp up our involvement in the ground war.

Isn't this the same way our long and bloody involvement in Vietnam got started? First we sent military advisors to arm and train the South Vietnamese, and when that didn't have the desired result the help was gradually ramped up, and finally American troops were sent. We seem to be following that same path to war in Syria -- even though many of the rebel factions fighting the Syrian government are avowed enemies of the U.S. (like al-Queda). This whole adventure in Syria just doesn't make sense. We seem to be on the road toward another bloody and seemingly endless quagmire. Didn't we learn anything at all from Vietnam, Iraq, and Afghanistan?
Posted by Ted McLaughlin at 12:06 AM