U.S. More Exceptional Than Other Nations ? 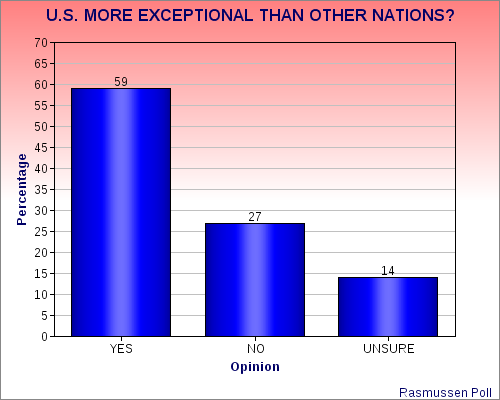 The chart above is from a recent Rasmussen Poll (conducted on September 12th and 13th of 1,000 likely nationwide voters, with a margin of error of 3 points). It shows the disturbing belief of too many Americans (about 6 out of 10) that the United States is exceptional among all the nations in the world.

We are not talking here about the normal patriotic love of country that most people have -- but a belief that because of history or god, America is somehow better than all other countries (and because of that exceptionalism, we have the right to dictate the parameters of right and wrong to other countries, and even force them at the point of a gun to accept our views). It's a silly idea at best, and at worst it is harmful both to us and others.

I was born and raised in the United States, and I love this country -- but I do not view it as being exceptional among all countries. Like other countries, the United States has its faults. A rudimentary view of its history shows that -- with slavery, genocide, segregation and racism, religious bigotry, misogyny, economic injustice, poverty, unnecessary wars, and many other problems immediately coming to light. And far too many of those problems have yet to be solved.

This does not mean the U.S. is a bad country -- only that we are like other countries (with a mix of good and bad things in our history and current situation). It does mean, however, that we need to discard this idea of American exceptionalism.

One of the best articles I have seen on this subject was written by historian Bernard Weisberger, and can be read at the website Moyers & Company. I highly recommend you read the entire article, but for your convenience I post part of it below. Weisberger says:

Democracy was not invented here. Neither were capitalism or Protestantism, the distinguishing characteristics of the first British settlers in North America. Even as colonies we were part of a trans-Atlantic culture. Our books and arts, our faiths and our economic practices were imported mainly from Great Britain and Western Europe. The first simmers of revolt here rested on the colonists’ demand for “the rights of Englishmen” gained in the mother country by uprisings a century earlier that had beheaded one king and deposed another. The elite among our Patriot leaders were familiar with the works of the French philosophers who were busily undermining the intellectual foundations of their absolute monarchy. James Madison, often called “the father of the Constitution” for his heroic labors in the Convention, like many fellow members was familiar with the theories and performances of republics in ancient Greece, Renaissance Italy and the Swiss confederation and Dutch republic of their own time. Knowledge like that guided their own choices among the political and practical deals they had to make as, in your own words, the great charter was “hammered, reasoned, shaped, argued, cajoled and compromised into being.”
As for creating a government on a blank slate free of crimes and errors?” No way. By 1787 it already had a century and a half of slavery and the theft of Indian land inscribed on it.
That’s not to deny the radicalism of the American Revolution, or the early existence of new and especially American habits of speech and forms of art. Voting into existence a people’s government — even with a limited electorate at first — was a daring leap into unknown seas, bordered by powerful nations still ruled by hereditary absolute monarchs and aristocrats. We were as much a novelty as the new plants and animals that our frontier exploration parties kept bringing home — a process, it’s worth remembering, also going on in other newly “discovered” parts of the world.
But 1787 was two and a quarter centuries ago. The democratic ideal, if not the practice, has long perched its banners over most of the globe. Our own democracy is no longer a lusty infant, but one of the world’s oldest, plainly suffering plutocratic and imperial dysfunctions and in need of a thorough popular overhaul to reclaim its genuineness.
The version of exceptionalism now peddled by tea party fable-makers has already done our economy noticeable harm. It convinces too many. It turns upside down our supposed hospitality to innovation by attempts to seal us off from learning anything from other, younger democracies. Improvements in health care, education, energy conservation — name your cause — are dismissed out of hand as “socialism,” bent on destruction of “the American way.” That kind of head-in-the-sand obstructionism is what we used to deplore in what we called “backward” parts of the globe. And what a useful tool it is for keeping the rich beneficiaries of our current unequal status quo in the top-dog position!
The damage that “unique” America as Dr. Hyde, fortified by a super-sized military establishment, has done is huge. Where once we independent-minded Yankees scoffed at “heel-clicking Prussian militarism,” the media and political establishments of today brag of our “superb” armed forces, while reporters covering Pentagon press conferences, as well as congressional committee members, struggle to outdo each other in deference to the beribboned generals who appear before them.
The international consequences are even worse. At a time when we need the world’s friendship and cooperation, the exceptionalist mindset licenses administrations of both mainstream parties to override the sovereignty of other nations in the interests of our own safety. Think of drones aimed at terrorists (so identified in secret by us alone) in neutral Pakistan or “allied” Afghanistan that take the lives and homes of nearby or mistakenly targeted civilians. Mere “collateral damage” to us, we ignore the scope of their tragic suffering. Think of CIA kidnappings on the streets of foreign cities under the very noses of their own police forces. Think of the symbolic impact of our refusals to sign international treaties banning the use of land mines or child soldiers, or of the special exemptions we demand from prosecution by local law authorities of crimes committed against civilians by our military personnel in the countries where we have bases established. What kind of self-portrait are we painting?
True, almost all nations commit offenses against common decency and common sense in the mindless fervor of war. Our country is not the only sinner or possibly the worst. But “We’re Number One” hyper-patriotism is simply the collective self-admiration of empty minds. It’s not what the American Revolution was fought for. Not what Tom Paine and Lincoln had in mind. The Declaration of Independence only says that we were seeking “the separate and equal station among the nations of the earth” to which the laws of Nature and Nature’s God entitled us.
That’s why I believe that it’s time to let exceptionalism become a creed outworn. It has lingered too long for whatever good it has done.
Posted by Ted McLaughlin at 12:02 AM