Bernie On The Right Way To Make A Budget 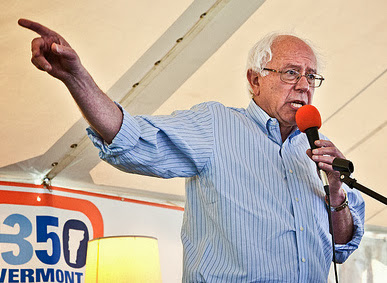 (The photo above of Bernie Sanders from Flickr.com is by David Garten.)

The bravest and smartest voice in the United States Senate, Senator Bernie Sanders (I-Vermont), wrote an article for the Los Angeles Times on October 28th (Monday). In it, he discusses the right way to make a federal budget -- and as usual, what he says is well worth reading and considering. Here are his words:


A budget panel composed of Democratic, Republican and independent members of the Senate and House is working on ways to avoid another government shutdown like the nightmare we all were just forced to endure.
As a member of that committee, I realize that our $17-trillion national debt and $700-billion deficit are serious problems that must be addressed. But I also realize that real unemployment remains close to 14%, that tens of millions of Americans with jobs are paid horrendously low wages, that more Americans are now living in poverty than ever before, that wealth and income inequality in the U.S. is greater than in any other major country and that the gap between the very rich and everyone else is growing wider.
We must look at how we got here to make informed choices about where we go next.
How did we go from healthy surpluses to terrible deficits? It's not that complicated. In 2001, President Clinton left office with a $236-billion surplus. The nonpartisan Congressional Budget Office foresaw a 10-year budget surplus of $5.6 trillion, enough to erase the national debt by 2011. It didn't work out that way.
Instead, under President George W. Bush, wars were launched in Afghanistan and Iraq without paying for them. The cost of those wars, estimated at up to $6 trillion, was tacked onto our national credit card. Then Congress passed and Bush signed an expensive prescription drug program. It also was not paid for. Then Bush and Congress handed out big tax breaks to the wealthy and large corporations. That drove down revenue. So did the recession in 2008, which was caused by a deregulated Wall Street. All that turned big surpluses into big deficits.
Interestingly, today's "deficit hawks" in Congress — Rep.Paul D. Ryan (R-Wis.), Sen. Jeff Sessions (R-Ala.) and other conservative Republicans — voted for those measures that drove up deficits. Now that they're worried about deficits again, they want to dismantle virtually every social program designed to protect working families, the elderly, children, the sick and the poor.
In other words, it's OK to spend trillions on a war we should never have waged in Iraq and to provide huge tax breaks for billionaires and multinational corporations. But in the midst of very difficult economic times, we just can't afford to protect the most vulnerable people in our country. That's their view. I disagree.
So where do we go from here? How do we draft a federal budget that creates jobs, makes our country more productive, protects working families and lowers the deficit?
For a start, we cannot impose more austerity on people who are already suffering. When 95% of all new income between 2009 and 2012 went to the top 1%, and while tens of millions of working Americans saw a decline in their income, we cannot cut programs that working families depend on.
Instead of talking about cuts in Social Security, Medicare and Medicaid, we must end the absurdity of corporations not paying a nickel in federal income taxes. A 2008 report from the Government Accountability Office found that was the case with 1 in 4 large U.S. corporations. At a time when multinational corporations and the wealthy are avoiding an estimated $100 billion a year in taxes by stashing money in tax havens like the Cayman Islands, we need to make them pay taxes just as middle-class Americans do.
While Congress in January finally ended Bush's tax breaks for the richest 1%, lower rates were left in place for the top 2%, those households earning between $250,000 and $450,000 a year. That must end.
At a time when we now spend almost as much as the rest of the world combined on defense, we can make judicious cuts in our armed forces without compromising our military capability.
And frankly, Congress must listen better. Some Republicans learned a hard lesson when the American people said it was wrong to shut down the government because some extreme right-wing members of Congress did not like the Affordable Care Act. Well, there's another lesson that I hope my Republican colleagues absorb. Poll after poll shows that Americans overwhelmingly do not want to cut Social Security, Medicare and Medicaid.
In fact, according to a recent National Journal poll, 81% do not want to cut Medicare at all, 76% do not want to cut Social Security at all, and 60% do not want to cut Medicaid at all. Other polls make it clear that Americans believe that the wealthiest among us and large corporations must pay their fair share in taxes.
It is time to develop a federal budget that is moral and makes good economic sense. It is time to develop a budget that invests in our future by creating jobs, rebuilding our crumbling infrastructure and expanding educational opportunities. It is time for those who have so much to help with deficit reduction. It is time that we listen to what the American people want.
Posted by Ted McLaughlin at 12:02 AM