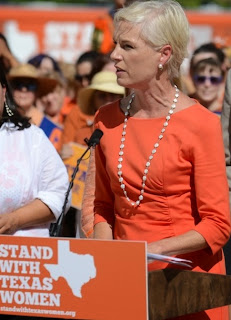 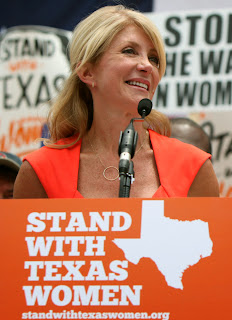 Last summer, the Republicans in the Texas legislature was bound and determined to pass an anti-woman law that, if it went into effect, would close almost all clinics performing abortions in Texas -- thus denying Texas women the right to control over their own bodies. To accomplish this, a special session of the legislature was called.

But they failed to pass that odious law in that special session, primarily because State Senator Wendy Davis (pictured above on the left) filibustered the bill until the time allotted for that special session ran out. That didn't deter them though. A second special session was called, and some legislative rules were changed, and the bill was rammed through the legislature (and signed by the governor).

That's when Planned Parenthood, headed by Cecile Richards (pictured above on the right), stepped up to do their part for Texas women. They filed suit in federal court to stop two of the worst provisions of the law -- one that required doctors performing abortions to have privileges at a hospital within 30 miles of their clinic, and another that required doctor's to follow federal protocols for using abortion pills (even though they are no longer considered the best medical practice).

Yesterday, U.S. District Judge Lee Yeakel issued an order overturning both provisions -- giving Planned Parenthood, and the women of Texas, an initial victory in this fight for women's rights. The judge concluded his decision by saying:

. . .the court will render a final judgement declaring that the admitting-privileges provision of House Bill 2 does not bear a rational relationship to the legitimate right of the state in preserving and promoting fetal life or a woman's health and, in any event, places a substantial obstacle in the path of a woman seeking an abortion of a nonviable fetus and is thus an undue burden to her. The court will enjoin enforcement of that provision. Although the medication-abortion provisions do not generally place an undue burden on a woman seeking an abortion, they do if they ban a medication abortion where a physician determines, in appropriate medical judgement, such a procedure is necessary for the preservation of the life or health of the mother. The court will so declare and enjoin enforcement of those provisions in such instance.

The decision will undoubtably be appealed to a higher court by Texas Attorney General Greg Abbott, if for no other reason, because the teabaggers and fundamentalists want it to be appealed. Abbott knows that those are the people who control the Republican Party in Texas, and he badly wants to be the GOP nominee for governor in 2014.
Posted by Ted McLaughlin at 12:04 AM