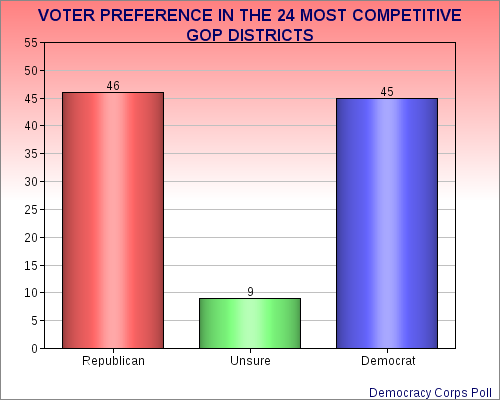 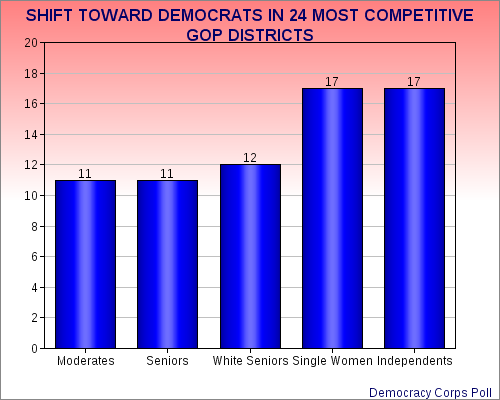 These charts were made using information contained in a new Democracy Corps Poll, conducted between October 19th and 24th of 1,250 likely voters in the most competitive congressional districts (with the margin of error for the Republican districts being 3.58 points). The survey may actually be skewed slightly toward the conservatives, since the only voters surveyed were those who had voted in the 2006 and/or 2010 elections.

The top chart shows the current political preference in the 24 most competitive Republican-held districts. Note that the current political preference in those districts is a dead heat -- with the Republican incumbents at 46% and their Democratic opponents at 45% (well within the survey's margin of error). The Democrats don't need all of these districts. They could lose seven of them and still flip the House over to their control. While it is still very early, this now looks like a real possibility.

What has happened to make this a possibility? That's shown in the bottom chart. Note that 11% of moderates have shifted away from the incumbent Republican and toward the Democratic opponent. And among Independents and single women the shift has been even greater -- about 17%.

I have been puzzled by the support from seniors for Republican candidates -- especially since those congressional Republicans have shown they would like to abolish Medicare and privatize Social Security, or at least cut the benefits offered by both programs. Both of these programs are supported by most seniors, and voting for a Republican is counter-productive to the desires of most seniors.

It now looks like reality is starting to get through to senior voters -- and they are starting to realize that congressional Republicans don't have the best interests of senior in mind. They are finally beginning to understand that the Republicans represent the interests of the rich and the corporations -- not seniors (or any other Americans).

If the Republicans lose any more support from seniors (and Independents), these 24 districts (and maybe even a few more) will wind up in the Democratic column. And fortunately for Democrats, it doesn't look like the Republicans have any intention of moderating their views about Social Security and Medicare.
Posted by Ted McLaughlin at 12:04 AM