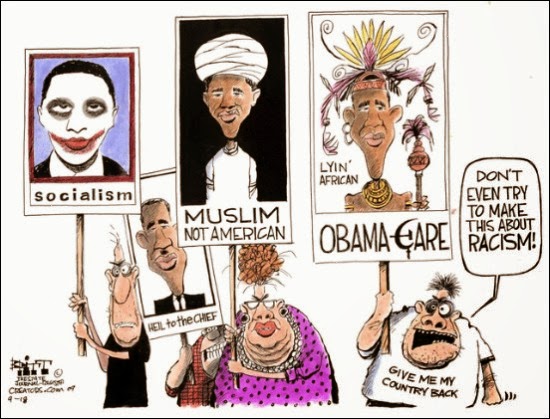 (The cartoon image of teabaggers above is by Chris Britt at Creators.com.)

Since the government shutdown engineered by the congressional Republicans, the polls have been coming fast and furious (to determine what the public thinks of what they did). The latest is the CBS News Poll (conducted between October 18th and 21st of 1,007 nationwide adults, with a 3 point margin of error).

This CBS News poll just verifies what many other polls have told us -- that Congress is very unpopular (9% approval - 85% disapproval), that congressional Republicans are viewed with more disapproval than either Democrats or the president, that the GOP is blamed for the shutdown (which was very unpopular), and that Republicans may have hurt their chances in the next election. You can go to the poll's website if you want the actual numbers.

But the part of the poll I found most interesting was when the respondents were asked about the teabaggers. The popularity of the tea bagger "movement" continues to drop -- probably because of their support for the government shutdown, and the fact that it was their elected officials who engineered that shutdown. Only 14% of the general public views the teabaggers favorably now -- 4 points lower than their already low number of 18% just a month ago.

And while many congressional Republicans brag that their teabagger views are shared by most Americans, this poll shows that the opposite is true. A significant majority of Americans (about 60%) say the teabaggers do not represent the views of most people in the United States, while only 28% thinks they do represent most Americans. 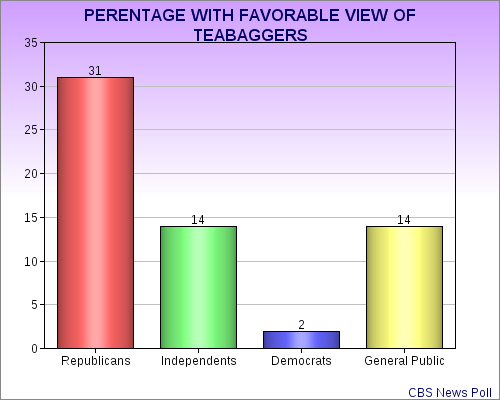 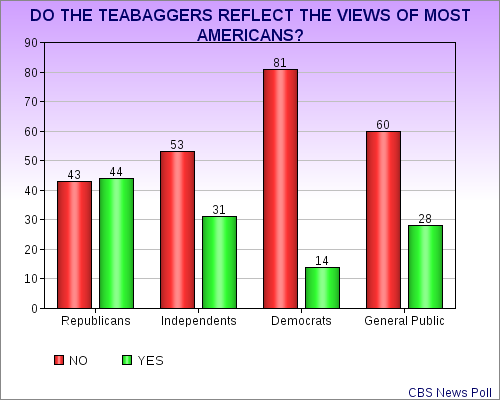 This puts the GOP congresspeople in a quandary. They need to appease the teabaggers to survive their own party primaries. But after doing that, they will have those primary campaign views used against them in the general election (because the internet doesn't forget anything) -- and the general public doesn't like those views.

In fact, there is evidence that the Republican efforts to appease the teabaggers may already be affecting the election chances of some. Public Policy Polling has been doing some polling in some competitive and semi-competitive congressional districts currently held by Republicans. And what they found should worry the GOP.

They found the incumbent Republican was trailing a Democrat in 37 of those 61 congressional districts -- and when poll respondents were informed the GOP congressperson had supported the shutdown, that figure climbed to 48 out of 61 (and one tie). Now the election is still a year away, and some of those districts will probably still be won by Republicans -- but the Democrats only need 17 of those 37 districts (less than half) to flip the House of Representatives.
Posted by Ted McLaughlin at 12:06 AM