The Chained-CPI Would Be A Cut In Benefits 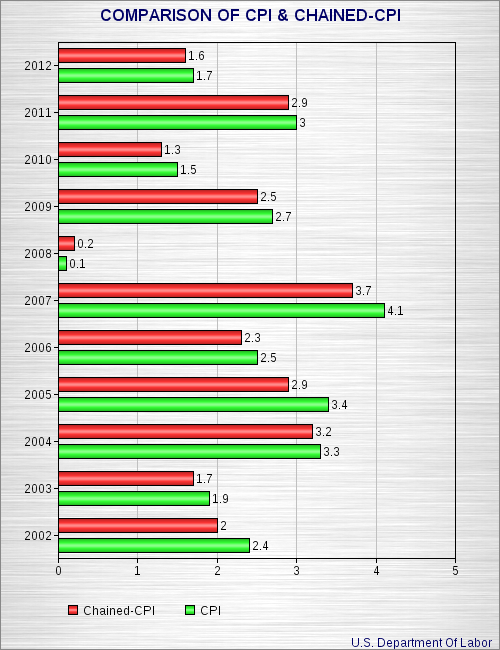 The Republicans have proposed changing the way this raise is determined. They want to stop using the CPI (which represents the inflation rate in the U.S.) and go to a figure called the Chained-CPI (in which the government makes various adjustments to the inflation figures). They claim the Chained-CPI is a more accurate figure. That is debatable. But what is not debatable is that using the Chained-CPI instead of the CPI would result in a lower COLA raise for recipients of Social Security (and Veterans) benefits.

The Republicans say this difference is insignificant. I disagree. The average Social Security check is only slightly above $1000 a month -- and if you are living on that (or even less), then every single dollar counts. But it gets worse. Over a period of several years this difference between the CPI and the Chained-CPI will amount to quite a bit as it adds up year after year -- and will result in recipients of Social Security (and Veterans) benefits receiving significantly less in their checks than the current COLA would have given them. To be blunt, those Living on Social Security (and Veterans) benefits would no longer be able to keep up with the real rate of inflation -- and they would become a little poorer with each passing year.

The Republicans claim this would not be a benefit cut. That is a lie. That's exactly what it would be -- a benefit cut. And over an extended period of time, it would represent a huge cut in benefits.

Sadly, the president and some blue dog Democrats have indicated a willingness to consider moving from the CPI to the Chained-CPI. This is unthinkable, and we need to let them know we will not tolerate their cutting Social Security (and Veterans) benefits -- just to appease the Republicans (who want to keep the rich from having to pay their fair share of taxes).
Posted by Ted McLaughlin at 12:06 AM