The Most Unequal Nation 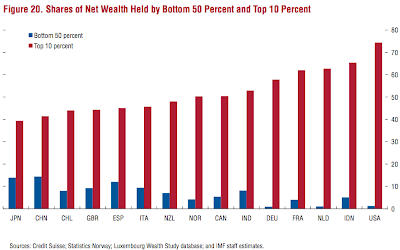 This chart is from the IMF, and was found at the website, The Big Picture. It shows the comparison between the richest 10% and the poorest 50% in terms of the wealth they own. The United States, on the far right in the chart, is clearly the most unequal nation of all -- with the top 10% owning a greater percentage of the country's wealth, and the bottom 50% owning a smaller percentage of the wealth.

You may think that is only among developed nations, and the U.S. would look better when nations like India and China are included -- nations that Americans tend to think of as very unequal. But that would be wrong. Both of those nations are on the chart, and neither is as unequal as the United States.

This must be fixed. As inequality increases, democracy decreases -- because the greater the portion of wealth held by the rich, the easier it is for them to buy what they want from government.
Posted by Ted McLaughlin at 12:00 AM