Albuquerque Stands Up For Women's Rights 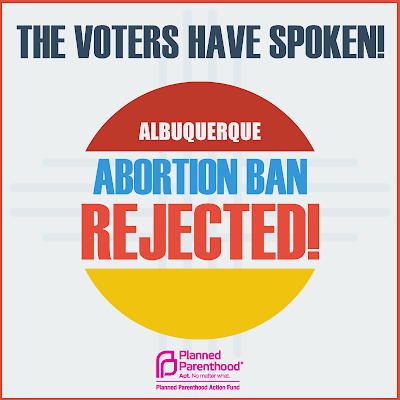 I applaud my neighbors in Albuquerque (just down I-40 to the west of Amarillo). The anti-women's rights movement tried to impose a 20-week ban on all abortions in that beautiful city by referendum -- and brought in lots of outsiders (and outside money) to campaign for the repugnant effort. But the good people of Albuquerque couldn't be convinced to vote against the right of women to control their own bodies. They defeated the onerous referendum by a 55% to 45% vote.
Posted by Ted McLaughlin at 12:08 AM