Minimum Wage Only 38% Of Average Wage 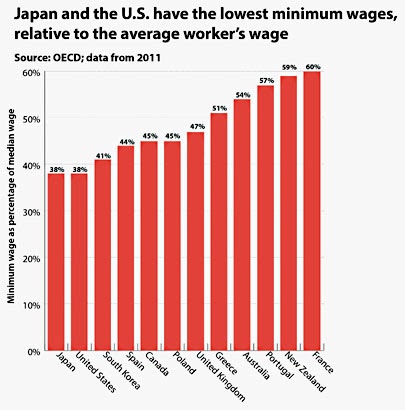 The president has recommended a raise in the minimum wage to at least $9.00 an hour (from the current $7.25 an hour). Some members of Congress want an even bigger raise, to $10 or $11 an hour. That's because the current buying power of a minimum wage salary is well below what it was back in the late 1960s (when it was about $10.50 in today's dollars). The truth is that, especially if a worker has a family, working full-time for minimum wage will not lift that family out of poverty -- and anyone who works for a living should be paid a wage that exceeds the poverty level.

Unfortunately, the Republicans are refusing to even consider raising the minimum wage. And some of the teabagger Republicans in Congress want to do away with the minimum wage completely -- allowing businesses to pay ridiculously low wages to desperate people. But then the GOP has never cared about workers. Their constituency is the rich and corporate America, and they would happily abuse workers to fatten the bank accounts of the rich and the corporations.

You may not think the low minimum wage in this country affects you. That is wrong. Since the corporations refuse to pay a wage that lift employees out of poverty, the government must take up the slack -- through food stamps, housing assistance, and other programs. This is your tax money paying for this. Those corporations are padding their already enormous profits by forcing you (and other taxpayers) to subsidize their employees.

It is time to substantially raise the minimum wage in this country. It is time for corporations and other businesses to pay a decent and livable wage to their employees -- and stop passing their expenses on to the taxpayers.
Posted by Ted McLaughlin at 12:06 AM