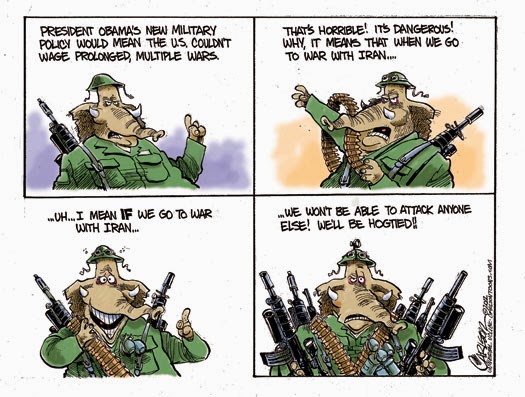 (The cartoon image above is by Stuart Carlson at carlsontoons.com.)

Secretary of Defense Chuck Hagel has announced some cuts to defense spending. The cuts will include a reduction in the number of standing military forces (from the current 520,000 to about 420,000), and will phase out the A-10 Warthog plane.

These are actually fairly moor cuts in military spending -- cuts that don't affect the areas with the biggest spending (the corporations in the military-industrial complex making duplicative, unneeded military systems or systems that just don't work or are outdated -- and the massive number of military bases around the world, which numbers between 800 and 900). Do we really need that many military bases -- nearly 8 bases on average for every country in the world? Of course we don't.

And we don't need to keep on spending money on things the military has said it doesn't want (or that don't work). A prime example is the engine for the new jet fighter. The military chose the engine it wanted, but Congress overrode them and voted to keep making two different engines for the new fighter. That is just one of many examples of wasteful spending. But Congress doesn't want to stop that spending, because that goes into the pockets of their corporate masters.

The truth is that the United States spends far more than any other nation on its military -- and far more than is needed to adequately defend this country. In fact, the U.S. spends about 45% of the military spending for the entire world, and more than the next fifteen biggest spenders combined. The American military budget could be cut in half, and we would still be spending far more than any other nation (friend or foe). Considering how much we actually spend on our military, the small cuts proposed by Hagel will not affect our ability to defend this country at all.

But you won't be able to find a Republican that will publicly admit that. They, with the help of Fox News, are acting like Hagel's cuts will devastate our ability to defend ourselves and will leave us helpless in the face of our enemies. They know it is not true But they also know that scaring the American people, and painting the Democrats as weak on defense, can get them votes -- especially among the ignorant and ill-informed. 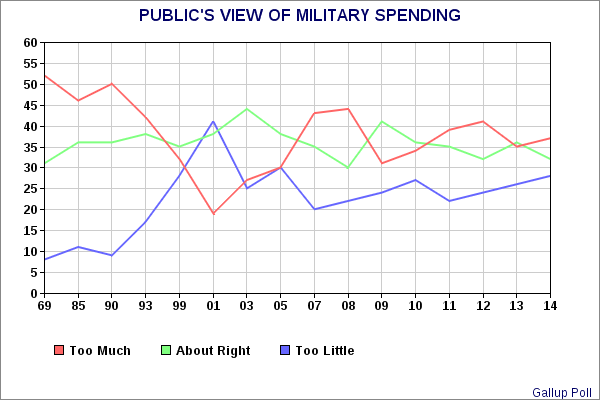 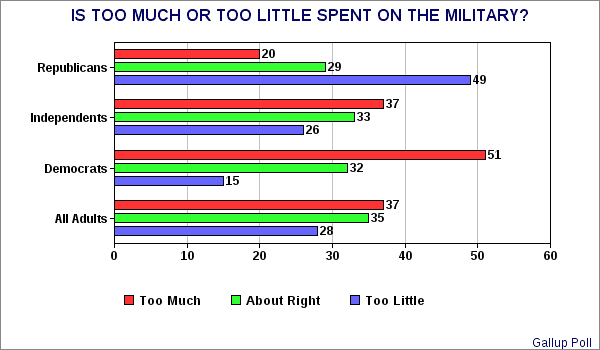 Note that in the past the American people were starting to realize that the military spending was too high in this country. But then we had the first Gulf War, and then the terrorist attack in New York. And the Republicans began to beat the fear drum loudly, telling Americans we must have a strong military to fight terrorism. This is ridiculous for a couple of reasons. First, we could cut our military spending drastically and still have the most powerful military in the world. And second, military power (while superb in a conventional war) is not suited for fighting terrorism (since terrorists have no country or borders, and can easily disappear when confronting military forces). The FBI and the CIA are much better suited for that task.

Currently only 37% of Americans think we spend too much on the military, and amazingly, 28% think we don't spend enough. Obviously the Republican fear propaganda has been pretty effective, and that's sad because it means we will continue to spend far too much on the military -- to the detriment of all other government programs (programs needed to help hurting Americans).

NOTE -- The above charts were made with information from the Gallup Poll -- the latest being done between February 6th and 9th of 1,023 nationwide adults, with a 4 point margin of error.
Posted by Ted McLaughlin at 12:06 AM