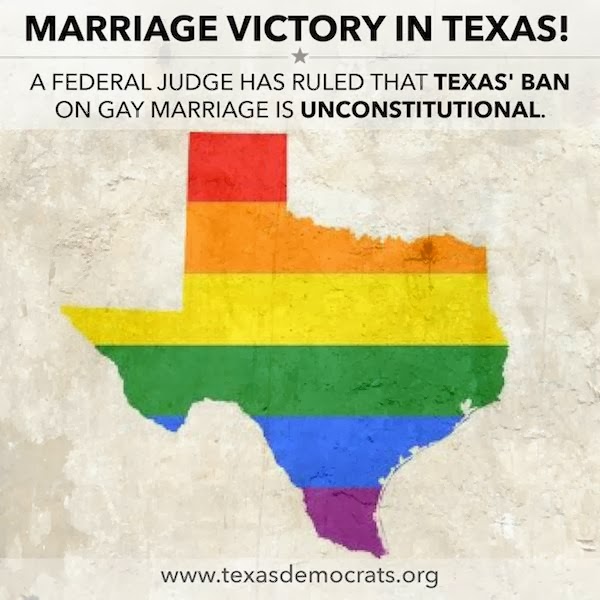 Back in 2005, the voters in Texas approved an amendment to the state's constitution that defined marriage as only being between a man and a woman. This amendment, which passed by a huge majority, had the effect of banning marriage between same-sex couples -- and the religious right was sure this amendment would settle the question of same-sex marriage in Texas for good. They were wrong.

While the voters do have the right to alter marriage rules through a constitutional amendment, any changes they approve must apply equally to all citizens. Neither voters nor state officials have the right to deny rights to any group -- rights that are given to other groups. That's because the Fourteenth Amendment to the United States Constitution (which trumps all state constitutions) says:

And that's just what a judge said on Wednesday in San Antonio. U.S. District Judge Orlando Garcia ruled that the Texas constitutional amendment banning same-sex marriage "violates plaintiffs' equal protection and due process rights under the Fourteenth Amendment to the United States Constitution". The judge also wrote these powerful words:

"Equal treatment of all individuals under the law is not merely an aspiration — it is a constitutional mandate. Consequently, equal protection is at the heart of our legal system and is essential for the existence of a free society."

This makes Texas the third state to have its same-sex marriage ban overturned recently by a federal judge. The other states are Utah and Oklahoma. All three states have had those decisions stayed until they can be reviewed by a federal appeals court. Utah has appealed to the 10th Circuit Court of Appeals, and Oklahoma is waiting to see the outcome of that appeal (since they are also covered by that appeals court). If the Texas decision is appealed (and it undoubtably will be), it will go to the 5th Circuit Court of Appeals.

Regardless of what these two appeals courts decide, it is time for the United States Supreme Court to stop avoiding this issue. The Fourteenth Amendment is very clear, and these same-sex marriage bans clearly violate that amendment. Opponents are going to try to claim these decisions violate their religious rights, but that is a ridiculous assertion. Allowing same-sex couples to marry does nothing to impinge on the religious rights of any person or church, and they can continue to practice their religious bigotry to their hearts content -- they will just no longer be able to force their own bigotry on others.

The majority of Americans support the equal right of the LGBT community to marry the person they love, and it is time for this issue to be put to rest once and for all.
Posted by Ted McLaughlin at 12:06 AM