Has His Legacy Of Hate Caught Up With Fred Phelps ? 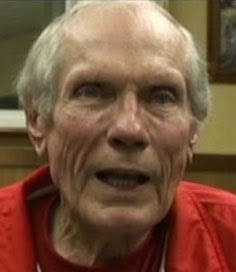 The ugly human pictured at left is Fred Phelps, the founder and leader of the hate-filled Westboro Baptist Church in Kansas. He has devoted his life to spreading hate for his fellow Americans -- from innocent homosexuals to soldiers who gave their lives in battle for this country. It is no exaggeration to say he is the least respected and most disliked human in the United States.

Now it looks like his hate-filled legacy may have caught up with him. We learn that he has been excommunicated from his own vile church, and is currently dying in a hospice in Topeka, Kansas.

His seemingly imminent death is no surprise. He is in his mid-eighties and has looked like his health was failing for quite a while. The real surprise, at least for me, is that he was excommunicated from his own church -- a church he founded, and is made up almost completely of members of his own extended family. What on earth could have prompted that church, now led by his equally-venomous daughter, to turn on Phelps and kick him out?

Could he have become so hate-filled that even the church and family he fathered could not accept it? I doubt that. His followers, the church's current members, have demonstrated in the past that they have a bottomless capacity for hate. Could he have realized the error of his ways and repented? Again, I doubt that. He has never wavered in his hate -- and if he had truly repented, I think he would have found a way to somehow make that known.

That leaves us with an intriguing possibility -- that his campaign of hate against homosexuals was a cover for his own same-sex desires (a possibility that many of us have suspected in the past, since he "doth protest too much"). Has he, either accidentally or intentionally, finally revealed his own homosexual desires? That is certainly something his own church and family would not be able to accept, and something for which they would happily excommunicate him.

Whatever the reason, it now looks like he is reaping what he has sown. As he lays dying in a hospice, his church family has not only turned on him, but refuse to let anyone else have any contact with him. In short, he is dying alone among strangers (who probably have no respect for him -- a sad and pitiful end for even a hate-filled man like Phelps.

Some have said that his own funereal should be picketed when he dies, sort of a payback for his own actions against innocents. I disagree. We are better than him, and we should act like it. Good people live on in the memories of those who loved them. Phelps won't have that. The memories that Americans will carry of Phelps are that he was a bitter and hate-filled man deserving no respect. That is enough.

NOTE -- Some have said that while Phelps spent his whole life trying to deny equal rights to the LGBT community, he may have actually done more to help them get those rights than anyone else -- because he showed Americans just how ugly bigotry really is, and caused many to turn their backs on that bigotry. I think a case can easily be made for that.
Posted by Ted McLaughlin at 12:06 AM