Hispanics/Asians - An Untapped Opportunity For Democrats 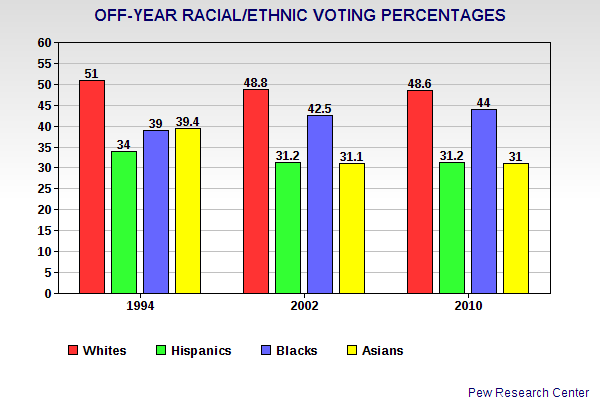 It is a fact that about 60% of Whites vote Republican, but in an election with a large turnout that is not enough to carry the day. As the 2012 election showed, when that 40% of Whites who don't vote Republican are combined with voters of other races and ethnicities the Democrats carry the day. That's because the Blacks, Hispanics, and Asians all vote over 70% for Democrats.

The problem in 2010 was too many people stayed home that normally vote Democratic. The teabaggers were energized and showed up to vote, while others did not. And sadly, that is a pattern in off-year elections. Note above that a larger percentage of Whites vote than others (about 49%). Blacks do almost as good (with about 44%), but Hispanics and Asians tend not to vote in those off-year elections (only about 31% each).

I have discussed in the past about how the demographic change in this country is going to catch up with the Republicans, and that will happen even in off-year elections. But that is going to take a few more years -- unless the Democrats get smarter. Instead of waiting for the demographic change to do it for them, the Democrats need to get busy tapping the potential of Hispanics and Asians. If these communities voted just as often as Blacks do in off-year elections, those election results would look a lot different.

Texas Democrats have started a program to get more Hispanics to the polls. I don't know how much effect it will have this new because the program is in its infancy, but it is the right thing to do -- and they need to include that outreach to the Asian community. In fact, this is something the Democrats should be doing in all states.

This kind of effort will help to make the current demographic change occur much faster in electoral politics.
Posted by Ted McLaughlin at 12:06 AM