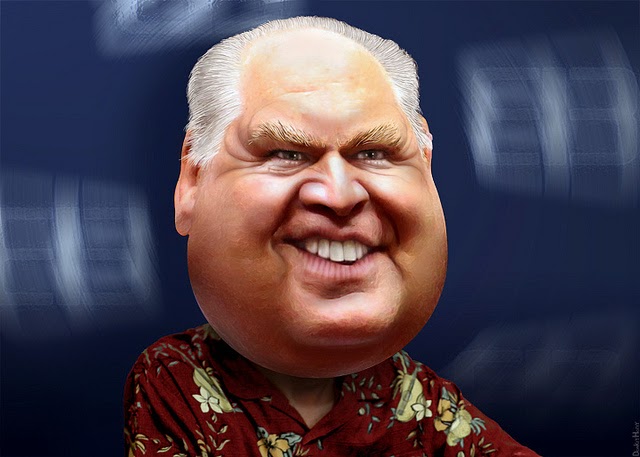 (This caricature of Rush Limbaugh is by the inimitable DonkeyHotey.)

A few years ago, Rush Limbaugh was the king of talk radio and talk radio was very popular. Those days are gone. That is the opinion of industry expert Holland Cooke, who says:

The conversation really picked up on February 29, 2012, Leap Year Day which was Day 1 of this three-day Rush Limbaugh/Sandra Fluke faux pas. And, if we were studying the history of talk radio, you stick a pin in the timeline there because at that moment, a very well organized and relentless advertiser boycott effort which remains underway today, rendered that business inviable.

Hundreds of blue-chip national advertisers basically have not only wandered away from Rush Limbaugh and some of the other righties, they’ve abandoned the format entirely.  They are afraid to be heard on a news talk station because this man’s use of his free speech triggered the opposing viewpoint exercising THEIR right to free speech.
The boycotters are speaking and using the marketplace to say, “ENOUGH!”  So as a consequence of all of this, the very company that owns, for instance, The Rush Limbaugh Show, which owns a bunch of great big talk stations has actually demoted him to smaller talk stations in two really big markets.  You and I did an Ed Show about this at the time. In Los Angeles and San Francisco they moved him aside because his continuing presence was making it tough to make a go of it with the big stations.
So he was told to go sit at the kid’s table and the irony in this is that for years the radio righties have been cackling about progressive radio’s failure to attain their level of listenership while the radio lefties had to go sit at the kid’s table.  Well now he’s there. . .
So the short answer is talk radio as we know it, the crazy uncle righty politically monologue-based I’m right you’re wrong genre is mathematically in trouble.
How bad is it? Well look at the ratings of the stations carrying Rush Limbaugh's show in the biggest markets. The stations carrying Limbaugh are 22nd in New York, 37th in Los Angeles, 19th in Chicago, 21st in Dallas, and 27th in San Francisco. That's a far cry from where he was a couple of years ago. The company Rush works for has removed him from their big stations (because he was losing them too much market share and money), and put him on smaller stations with less power (and therefore less reach).

Now some will say that this is censorship and a violation of free speech -- but that is nonsense. The constitutional guarantee of free speech just guarantees that the government will not punish Rush (or anyone else) for their speech. It does not say the public at large, or the radio stations, can't act in their own interests. The public, including those urging an advertising boycott, have just as much right to free speech as Rush does -- and their speech has been very effective (costing him more than 3100 advertisers).

The truth is that the free market (which right-wingers say they support) has spoken, and it is saying it wants nothing to do with Limbaugh. His days of radio supremacy are over. He may or may not get a new contract, but if he does it will be for far less than he's now making. His marketability has fallen drastically.
Posted by Ted McLaughlin at 12:06 AM