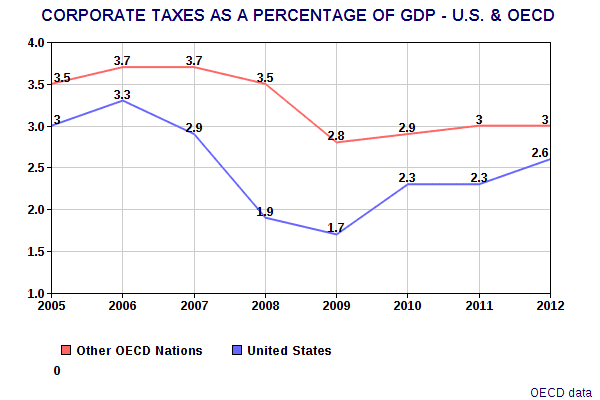 The mantra of right-wing Republicans has been for decades now that taxes in the United States are too high -- especially the corporate taxes. They say this is hurting American corporations in their effort to compete with corporations based in other nations. To put it mildly, that's a lot of horse manure.

While the top corporate income tax rate is 35%, there is something the Republicans won't tell you -- that no American corporation pays that rate. In fact, the General Accounting Office (GAO) says that the effective tax rate for American corporations is a shockingly low 12.6% (lower than most middle class workers have to pay) -- and even when foreign, state, and local taxes are added in, the total effective tax rate is only 16.9% (still far lower than the Republicans would have you believe).

And it is not just corporate taxes that are lower in the United States than in other OECD countries. The same goes for taxation in general. Note the two charts below (made with OECD information). Note that U.S. taxes are a huge 10 points lower (as a percentage of national GDP) than the taxes in other OECD nations. And only two countries (Mexico and Chile) have lower taxes when you look at all 34 OECD countries. The United States is actually one of the least taxed nations. 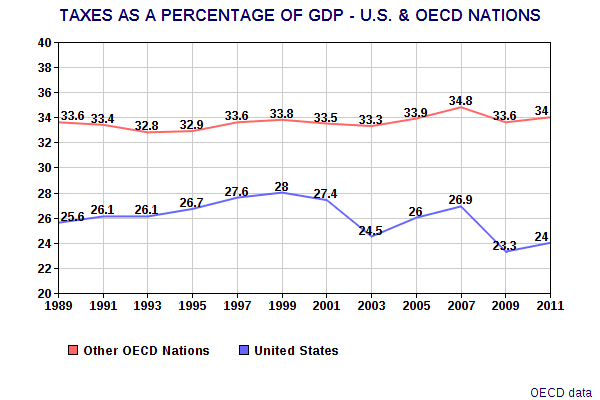 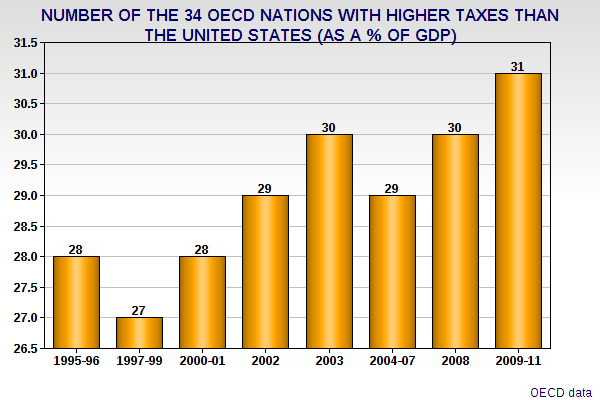 So, are taxes too high in the United States. No, and the Republican charge that they are is just an effort to bamboozle the public into voting for them. The GOP wants to lower taxes for their constituency (the rich and the corporations), and they can't do that unless they convince people that taxes are too high. The U.S. government really doesn't get enough tax revenue, especially from the rich and the corporations --  and anyone saying otherwise is either ignorant or lying.
Posted by Ted McLaughlin at 12:06 AM