Can The House Of Representatives Be "Flipped" In 2014 ? 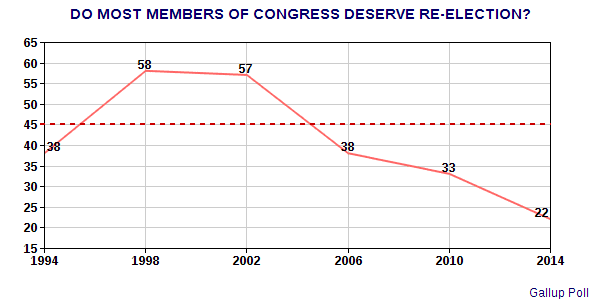 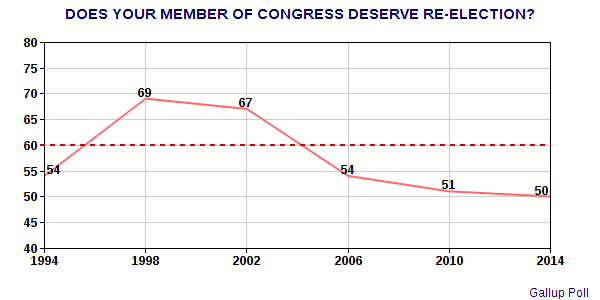 The charts above were made from information in Gallup Polls taken in off-year elections. The previous polls were taken right before the elections, and the most recent poll was taken between April 24th and 30th (of a nationwide sample of 1,336 registered voters, with a margin of error of 3 points). I doubt that the numbers will get any better for members of Congress between now and November though, since the numbers for Congress have been extremely low for quite a while now.

These charts show something very interesting. Only three times in the last twenty years has the feeling that most members of Congress don't deserve re-election dipped below 45%, and it was in those same three election years that the feeling a person's own member of Congress didn't deserve re-election dipped below 60%. Those years were 1994, 2006, and 2010.

Is this year going to again result in a flipping of party control in the House? The numbers certainly suggest that is a very real possibility. Both the numbers saying their own member deserves re-election, and the number saying most members deserve re-election, are lower than in any of the last three years the control of Congress flipped from one party to another.

The public doesn't like this Congress, and there is a definite anti-incumbent mood. That should worry the Republicans, because they hold the majority right now -- and an anti-incumbent wave at the polls this year would hurt them the most (as it has hurt the majority party in the past). Can the House be flipped again this year?

YES, especially since the polls show the public is more angry at the congressional Republicans than the congressional Democrats. It'll just take 17 new seats for the Democrats, and there are far more competitive districts (mostly held by the GOP) than that -- districts where the anti-incumbent mood of the voters could make a big difference.
Posted by Ted McLaughlin at 12:06 AM