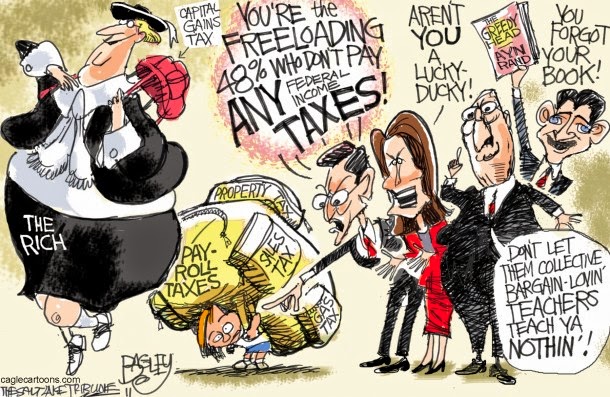 (This cartoon image is by Pat Bagley in the Salt Lake Tribune.)

The website Liberal America busts 10 myths about poverty -- myths that the rich and the Republicans would love for you to believe. They have graphs and charts to go along with their article, and I recommend you go over and see them. But here are those 10 myths they bust.

1. Single moms are the problem.
Completely false. Only nine percent of low-income moms have been single throughout their child’s first five years, while 35 percent were in a marriage or relationship with the child’s father for the entire time. (Source: Analysis by Dr. Laura Tach at Cornell University)

2. Absentee fathers are the problem.
The majority of dads are active in the lives of their children. Sixty percent of fathers with low income see at least one of their children daily, and another 16 percent see their children every week. (Source: Analysis by Dr. Laura Tach at Cornell University)

3. Most black fathers are deadbeats and they are the problem.
This is a stereotype that is based on racism and bigotry and fostered by the right-wing media. In actuality, non-custodial black fathers are more likely than white or Hispanic fathers to have a presence in the lives of their children every day.

4. Poor people are lazy.
Nope. In 2004, more than 60 percent of families on food stamps that had both kids and a non-disabled, working-age adult had jobs. In 2013 the number rose sharply to 96 percent.

7. We’re winning the war on poverty.
Wrong. We are miserably losing the war on poverty, but cutting programs isn’t the solution because we are definitely alleviating the pain of poverty. Having said that, since 1996 the number of households with children who live on less than $2 a day per person has grown 160 percent since 1996.

8. Social Security and Medicare has ended the struggles of most single elderly women.
Unfortunately, there is absolutely no truth to this sentiment. The number of elderly single women living in extreme poverty jumped 31 percent from 2011 to 2012.

9. Homeless people are drunks living in the streets begging for money.
Dangerously false. A shocking one in 45 kids in the U.S. experiences homelessness every year. There are 22,000 homeless children in New York City alone.

10. Handouts and freebies to deadbeats are bankrupting the country.
This is perhaps the most cruel lie that is easily debunked with one glimpse at the federal budget. In 2012, total welfare funding was 0.47 percent of the federal budget.
Posted by Ted McLaughlin at 12:02 AM