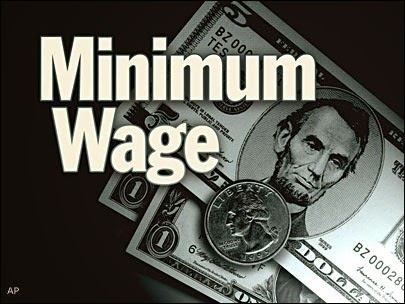 This is illustrated by the experience of The Gap -- who recently raised their minimum wage to $9.00 an hour, and will raise it next year to $10.00 an hour. They said they are already experiencing positive benefits from that decision. Applications for employment at their stores had been declining, but that has now been reversed (giving them more applicants from which to choose). They also expect their employee turnover to decrease.

The truth is that businesses would benefit in several ways from raising the minimum wage to a livable level. Here are a few of those benefits:

1. Businesses would receive a greater number of applications for jobs. This would help them to hire better qualified employees, who will do a better job for the business.

2. Employees making a livable wage would not be eager to leave the job, thus reducing the turnover of employees (and saving businesses the cost of hiring and training new employees).

3. Employees making a livable wage are happier and more loyal, and that makes them more productive (which increases the profits of the businesses).

4. If the minimum wage was raised to at least $10.10 an hour for all businesses, it would inject a huge amount of new money into the economy. And those workers receiving that higher minimum wage would need to spend that money (since they are already struggling to survive). That new money being spent would not only boost the economy, but would increase profits for the businesses in our economy.

The Republicans (and their corporate masters) like to paint the issue of raising the minimum wage as being one of workers against businesses. The corporations do this because they want the taxpayers to keep on picking up the tab for much of their labor costs, and the Republicans just don't seem to know any better. But the reality is that raising the minimum wage to a livable level would benefit both workers and businesses -- and it would benefit taxpayers by taking many workers off government rolls (such as food stamps). The only people who might not benefit are the corporate executives (who might see their outrageous salaries and bonuses reduced) -- and that is not a bad thing.

The United States government needs to raise the national minimum wage to at least $10.10 an hour immediately, and then tie that wage to the rate of inflation. It would be good for the country, and for almost every American citizen.
Posted by Ted McLaughlin at 12:06 AM