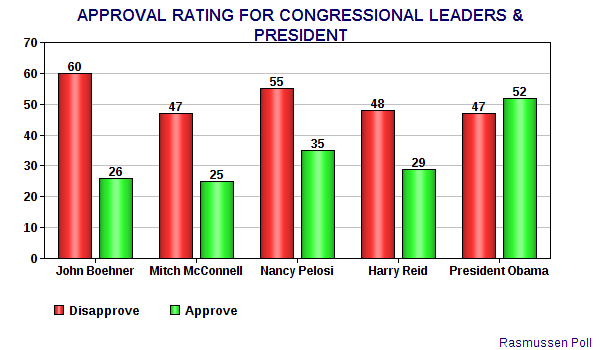 These approval ratings for the congressional leaders and President Obama are from the normally Republican-friendly Rasmussen Poll.

The Republicans are trying hard to say the coming election is a referendum on President Obama (or at least should be). If it is then they are in trouble, because President Obama's ratings have rebounded (after falling when the Obamacare program got off to a poor start). But the ratings for congressional leaders are much worse. They have not rebounded. While Obama has a slight positive edge (52% to 47%), all of the congressional leaders have a very low approval rating -- and the lowest approval is held by John Boehner and Mitch McConnell.

Put this together with the low approval ratings for Congress as a whole, which has not rebounded and remains at an average of recent polls at 13.4%, and it becomes obvious what this election is really going to be about -- a referendum on a Congress that almost no one likes. The only question for me is just how strong will the anti-incumbent vote be? Will it be strong enough to flip control of Congress? That will depend on the turnout -- on whether voters show their disgust by voting against incumbents, or by staying at home on election day. A big turnout will favor Democrats, while a small turnout will help Republicans.
Posted by Ted McLaughlin at 12:02 AM