Obamacare Has Significantly Reduced The Number Of Uninsured Americans 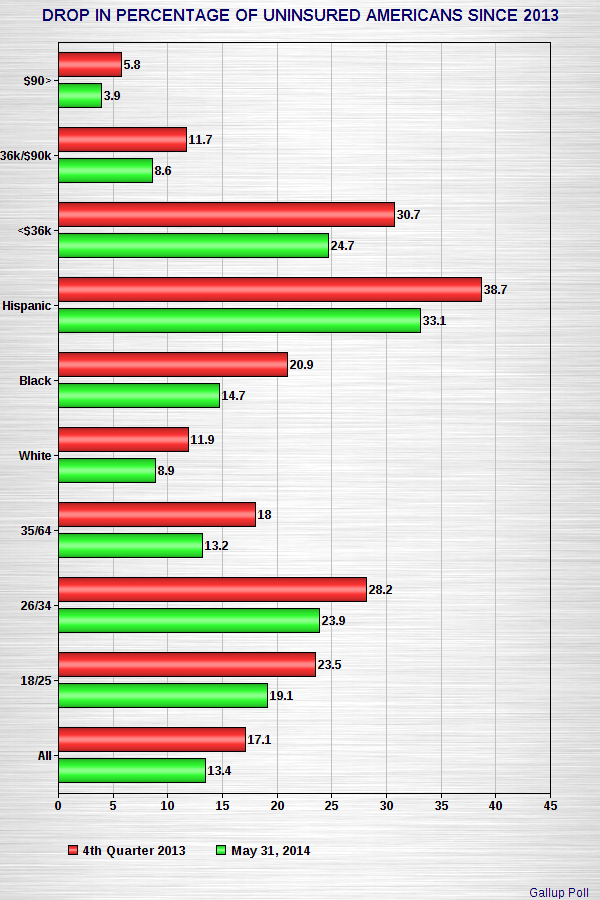 The chart above was made from information in a recent Gallup Poll (conducted between April 1st and May 31st of a random national sample of 30,430 adults, with a margin of error of only 1 point).

As you can see, the percentage of uninsured Americans has dropped significantly since Obamacare has gone into effect. At the end of 2013, the uninsured rate in the United States was 17.1% (down from 18% earlier in the year). But the program really took off in the first few months of 2014, and the uninsured percentage has now dropped to 13.4%. That's a nice start for the program, and I'm sure the numbers will drop even further as people become used to the program -- and realize the GOP has been lying about costs (which are cheaper for most) and coverage (which is better for most).

But the biggest impediment to further lowering the number of people without health insurance is the Republican's refusal to expand Medicaid in about half of all states. If this expansion was to occur, millions more Americans could be covered with insurance. In Texas alone, more than 1.5 million people could have health insurance by the expansion of Medicaid.

Those Republicans still hold the hard-hearted attitude that health care is not a right, but a product -- and that product should only be available to those who can afford to pay for it. They know that their refusal to expand Medicaid will cost the lives of between 7,000 and 17,000 Americans each year, and they just don't care. Trying to protect the rich from having to pay taxes (and to keep the African-American president from getting credit for improving health care for Americans) are more important to them than saving the lives of American citizens.

There are a couple of solutions to this intransigence by Republican state governments. One would be to make Medicaid a wholly federal program like Medicare (instead of a program administered by the states). But the best solution, in my opinion, would be to turn Obamacare into a single-payer government-run program like Medicare. That would cover all Americans with insurance and be cheaper per patient than the current system. Of course, as long as the GOP controls the House of Representatives, nothing will be done -- to make Obamacare easier to access by more Americans or to expand Medicaid.
Posted by Ted McLaughlin at 12:04 AM