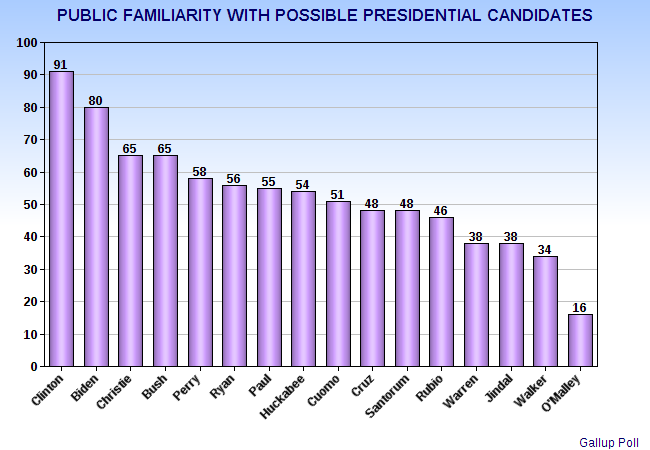 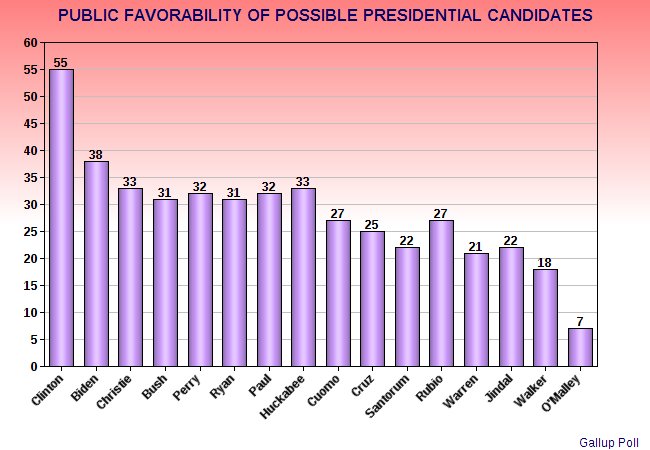 It is just an electoral fact that voters most likely will vote for a candidate they know (familiarity) and like (favorability). Considering this, the Gallup Poll questioned 1,013 randomly chosen national adults between July 7th and 10th on their familiarity with and favorability for the top 16 presidential candidate (5 Democrats and 11 Republicans). The poll has a margin of error of 4 points.

The numbers should make Hillary Clinton feel good about her chances of being elected president (assuming she decides to run). Here numbers are far better than those of anyone else. About 91% of the population is familiar with Clinton (26 points better than her closest possible GOP opponent), and 55% view her favorably (about 22 points better than the most popular Republican). In fact, Clinton was the only candidate to score above the 50% mark in favorability.

The pleasant surprise for Democrats is that Joe Biden, while he didn't come close to Clinton's numbers, was able to outpace all the Republicans in both familiarity and favorability. He scored 15 points better than the closest Republican in familiarity, and 5 points better than the closest Republican in favorability. Both of those numbers exceed the margin of error of the survey.
Posted by Ted McLaughlin at 12:04 AM