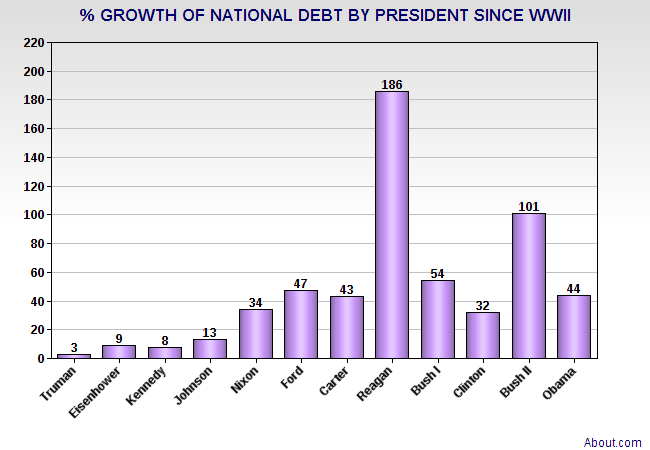 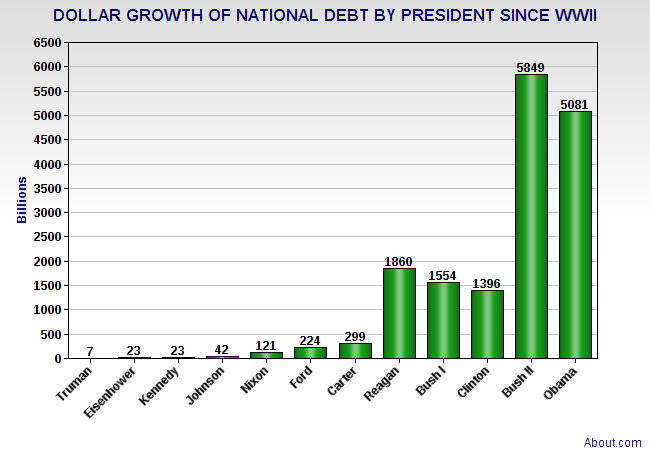 I recently saw a comment from a Republican on Facebook that said President Obama had added more to the national debt than all presidents combined from George Washington through George W. Bush. This is a common Republican misrepresentation, and it is time it was exposed as the lie that it really is.

The best way to look at this is to consider the percentage of rise in the national debt each president was responsible for after taking office. And when you look at it that way, President Obama has presided over less growth in debt than any of the last four Republican presidents. The growth in national debt under Obama is 44% -- while the growth under the GOP presidents are Ford (47%), Reagan (186%), Bush I (54%), and Bush II (101%). The other presidents during that stretch were Carter (43%) and Clinton (32%).

And even if you just consider the dollar growth of the national debt, President Obama is still not the president with the largest growth. That dubious honor goes to George W. Bush, who increased the national debt by 5.849 trillion dollars. President Obama is second, with 5.081 trillion dollars in growth. However, the Republicans must take much of the blame for that since they have blocked any attempt the president has made to change the disastrous spending policies of George W. Bush.

Obama inherited a nation in recession -- with government revenues sharply off because of the Bush tax cuts and millions of people out of work. The spending was also out of control with two unnecessary wars being waged and poverty rising because of the recession and loss of jobs (including the outsourcing of jobs to other countries.

Obama has tried to do away with the tax breaks for outsourcing, but has been blocked by the Republicans. He has also tried to restore the tax revenue, but was only able to restore a part of it (which has brought down the budget deficit). The rich are still able to pay a smaller percentage by taking advantage of special lower capital gains tax rates, instead of the higher earned income tax rates (the rates paid by the middle and working classes). And the Republicans have also blocked efforts to create jobs (which would have stimulated the economy and increased revenues).

In short, the Republicans have done everything they can to sabotage the economy by continuing the terrible Bush economic policies -- and now they want to blame that on President Obama. It is not just a lie -- it is a mean-spirited lie that tries to shift the blame off of their own poor policies and mismanagement.

The truth is that the Republicans are not fiscally responsible. They are the biggest spenders. They just use that spending to help the rich instead of those hurting Americans who really need it. I agree that we need more fiscal responsibility in Washington -- but we won't get that by putting another Republican in the White House, or by letting the Republicans continue to control either house of Congress.
Posted by Ted McLaughlin at 12:06 AM