Has Israel Gone Too Far With Latest Attack On Gaza ? 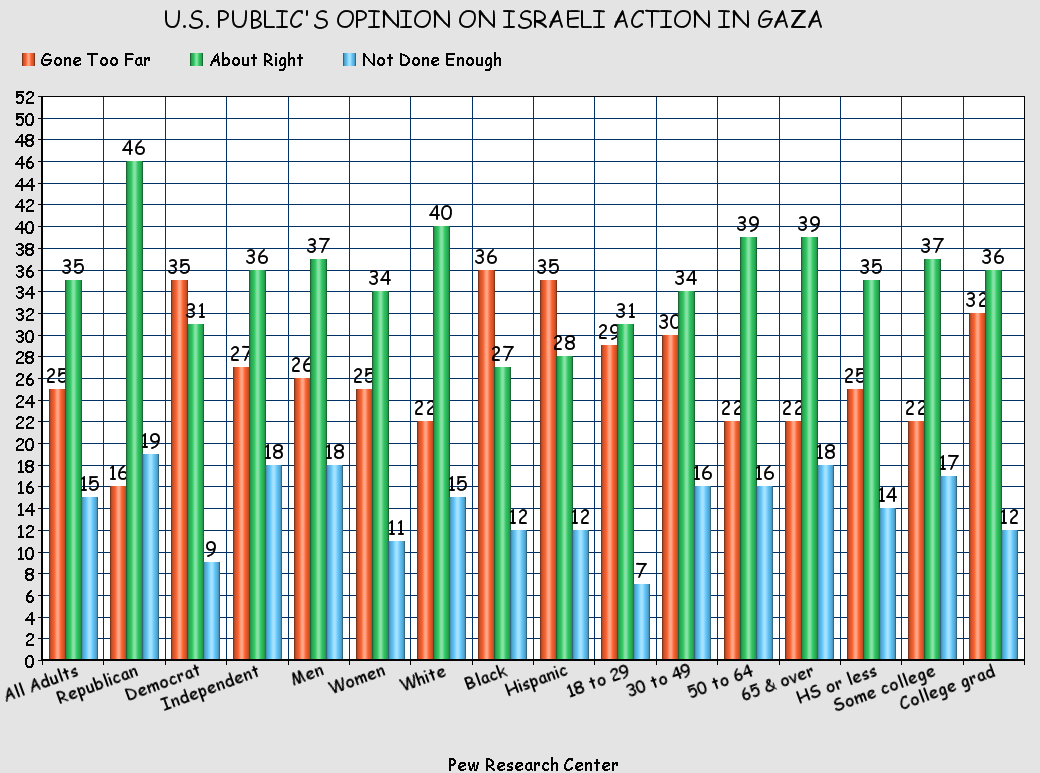 Israel is still continuing its war on Gaza, and so far, more than a thousand inhabitants of Gaza have been killed -- at least a third of them have been children. Israel's excuse for the invasion and killings were to locate and destroy tunnels built by Hamas to allow them to get into Israel. It's hard to understand though how the indiscriminate bombing of Gaza civilians is helping to accomplish that -- including the bombing of a hospital, a U.N. refugee camp, and a group of children playing on the beach.

The American people have always been solidly behind Israel, but I have to wonder if the Israelis haven't gone too far this time -- far enough to start eroding some of that American support. The Pew Research Center also wondered about that, and that did a survey asking Americans whether the Israelis had gone too far with these latest attacks on Gaza. The survey was taken between July 24th and 27th of a random nationwide sample of 1,005 adults, and has a 3.6 point margin of error.

As the chart above shows, the support for this latest Israeli aggression is not absolute. Note that pluralities of Democrats, Blacks, and Hispanics all say that Israel has gone too far this time -- and those between 18 and 29 are split on the matter. About one out of every four Americans (25%) agree with that. Meanwhile 35% say the Israeli action was appropriate.

But the most troubling aspect of the survey is that 15% of Americans (and more of some groups) say the Israelis haven't been harsh enough. Evidently killing nearly 400 children and hundreds of innocent civilians is Ok with them. Keeping Gaza as a giant concentration camp, and depriving its citizens of adequate food and medical supplies is not enough for these folks. They want blood, and they don't care if it's the blood of children or innocents.

Frankly, I'm shocked at the attitude of these people. There is a line beyond which it is just immoral to cross -- and that applies to all countries, even Israel. As horrible as the holocaust against the Jews in World War II was, it doesn't give them the right to slaughter innocents and children in Gaza.
Posted by Ted McLaughlin at 12:08 AM