Race For Governor In Georgia Is Currently A Dead Heat 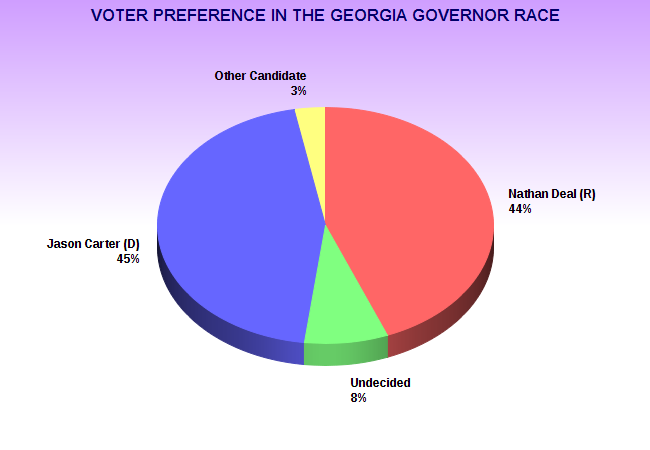 Now that the primaries are over in Georgia, it is starting to look like Georgia might not be as red a state as in the past. It seems to be becoming a nice shade of purple (meaning that both parties are now competitive in that state).

A few days ago I posted about a recent poll in the U.S. Senate race in Georgia between Michelle Nunn (D) and David Perdue (R). That survey showed the Democrat leading that race right now, and has a real chance to snatch this senate seat away from the Republicans.

Now there is a new poll out on the governor's race in Georgia. It shows Democrat Jason Carter with a one point lead over incumbent Republican Nathan Deal. That 1 point lead is within the poll's margin of error, meaning the race is currently a dead heat. But it also means the Democrat has a chance to win this race -- something that no one would have predicted a few months ago.

This information is from a new Rasmussen Poll -- taken on July 23rd and 24th of 750 likely Georgia voters. It has a margin of error of 4 points.
Posted by Ted McLaughlin at 12:04 AM