America Is Losing It's Prudishness 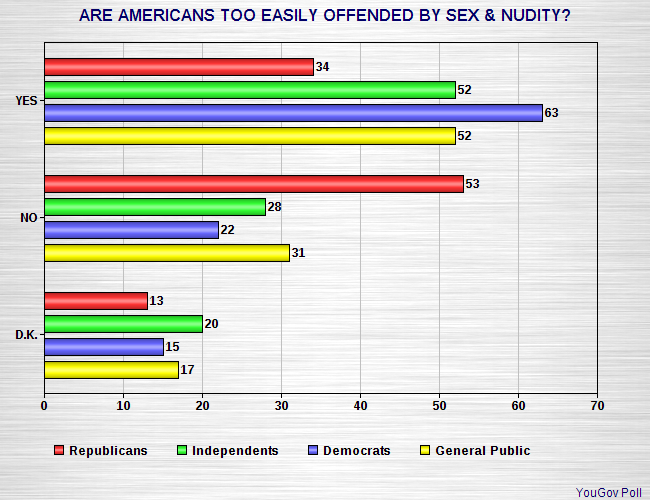 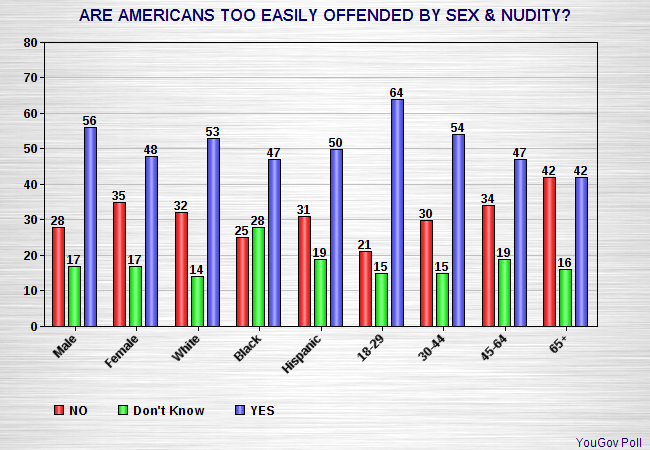 For much of this country's history, the American public has been very prudish. Nudity was shocking to most, and sex was considered to be something dirty that could not be talked about (especially in a school health class). Most of Europe and much of Asia have been much more open-minded about nudity and sex -- probably because they don't let religion rule their society as much as we do in America.

But that seems to be changing. This YouGov Poll shows that most people in the U.S. think Americans are too easily offended by sex and nudity. This includes Democrats and Independents. Only the Republicans disagree (and think Americans should be prudish when it comes to sex and nudity) -- but that's understandable since that party has most of the nation's right-wing fundamentalists. And it turns out that both genders, all races, and most age groups also think Americans are too prudish -- with only those 65 and older not agreeing (they are split on the question).

I don't know about you, but I think this is a very good thing. It's about time that Americans grew up, and realized that sex (as long as it is consensual) is a natural thing, and so is nudity. I'm not saying we should all go around nude (I doubt many would want me to do that), but it's not the end of the world (or some kind of sin) to see someone nude.

The charts were made from a survey taken on August 2nd and 3rd of a random national sample of 1,000 American adults, with a margin of error of about 4 points.
Posted by Ted McLaughlin at 12:02 AM