Patrick Wants To Keep National Guard On The Border 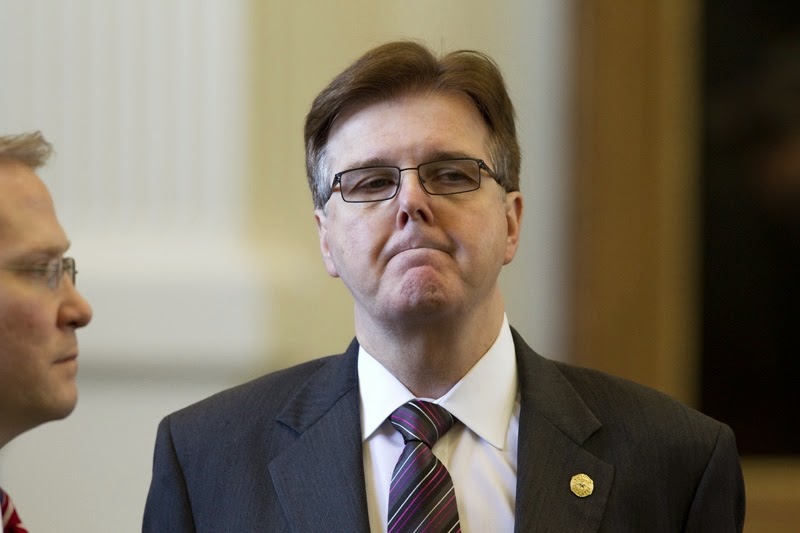 (This photo of Dan Patrick is by Bob Daemmrich at the website of The Texas Tribune.)

Lt. Governor Dan Patrick has wasted no time in trying to appease his xenophobic base. Patrick has called for keeping the Texas National Guard on the border with Mexico through the next biennium (which ends in August of 2017).

Those troops were sent to the border by Rick Perry, when it became national news that children from Central America were turning themselves in at the border to escape a terrible situation in the home countries. It didn't seem to matter to Perry that those children weren't trying to sneak in to this country, but were turning themselves in -- and that undocumented immigrants crossing the border is also at its lowest number in years (due mainly to our poor economy). Perry was playing a political game -- reacting to the unwarranted fears of his right-wing supporters.

Where the money is going to come from? How much money is it? Well, he wants to extend the stay for another 29 months at a rate of $6 million dollars a month. My calculator tells me that's about $174 million. That may not sound like a lot when you consider the total Texas budget -- but remember, Texas recently slashed it's spending on all state programs to balance that budget -- including $5 billion cut from ecucation (and only a tiny portion of that was restored).

Texas gets most of its revenues from a sales tax and from oil&gas revenues. Thanks to the sharp drop in the price of oil, those revenues are dropping. And the sales tax is already at 6.25% (and most cities have tacked their own sales tax on to that -- raising it to 8.25%). And considering Texas has the most low-wage jobs in the nation (both in absolute numbers and percentage), I seriously doubt raising that tax would be politically viable.It would just take more money out of the budgets of Texans -- most of whom are already struggling.

The money would have to come from further cuts to other state agencies -- agencies whose budgets were already slashed to the bone by the last two legislatures. And it would not be done out of necessity, but so Patrick can appease his xenophobic base.

Keeping those troops on the border is a very bad idea -- an idea that Texas neither needs nor can afford.
Posted by Ted McLaughlin at 12:02 AM