A Society Built On Slavery (And Still Benefitting From That) 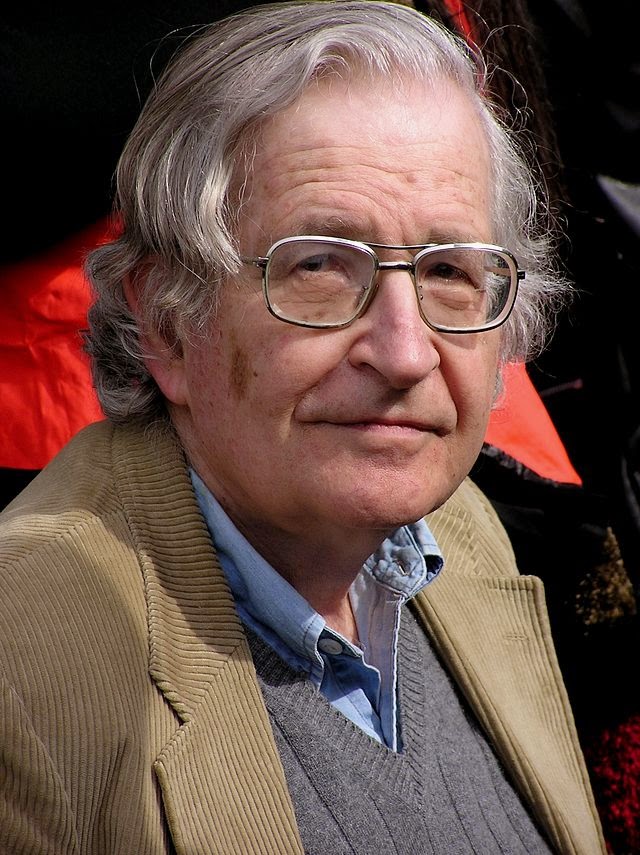 The following thought-provoking remarks are by Noam Chomsky (pictured at left in a photo by Duncan Rawlinson). They are a part of a New York Times interview with George Yancy. The entire interview is excellent, and I urge you to read the whole thing.

The America that “black people have always known” is not an attractive one. The first black slaves were brought to the colonies 400 years ago. We cannot allow ourselves to forget that during this long period there have been only a few decades when African-Americans, apart from a few, had some limited possibilities for entering the mainstream of American society.

As is now known, they were highly efficient. Productivity increased even faster than in industry, thanks to the technology of the bullwhip and pistol, and the efficient practice of brutal torture, as Edward E. Baptist demonstrates in his recent study, “The Half Has Never Been Told.” The achievement includes not only the great wealth of the planter aristocracy but also American and British manufacturing, commerce and the financial institutions of modern state capitalism.

It is, or should be, well-known that the United States developed by flatly rejecting the principles of “sound economics” preached to it by the leading economists of the day, and familiar in today’s sober instructions to latecomers in development. Instead, the newly liberated colonies followed the model of England with radical state intervention in the economy, including high tariffs to protect infant industry, first textiles, later steel and others.

There was also another “virtual tariff.” In 1807, President Jefferson signed a bill banning the importation of slaves from abroad. His state of Virginia was the richest and most powerful of the states, and had exhausted its need for slaves. Rather, it was beginning to produce this valuable commodity for the expanding slave territories of the South. Banning import of these cotton-picking machines was thus a considerable boost to the Virginia economy. That was understood. Speaking for the slave importers, Charles Pinckney charged that “Virginia will gain by stopping the importations. Her slaves will rise in value, and she has more than she wants.” And Virginia indeed became a major exporter of slaves to the expanding slave society.

Some of the slave-owners, like Jefferson, appreciated the moral turpitude on which the economy relied. But he feared the liberation of slaves, who have “ten thousand recollections” of the crimes to which they were subjected. Fears that the victims might rise up and take revenge are deeply rooted in American culture, with reverberations to the present.

The Thirteenth Amendment formally ended slavery, but a decade later “slavery by another name” (also the title of an important study by Douglas A. Blackmon) was introduced. Black life was criminalized by overly harsh codes that targeted black people. Soon an even more valuable form of slavery was available for agribusiness, mining, steel — more valuable because the state, not the capitalist, was responsible for sustaining the enslaved labor force, meaning that blacks were arrested without real cause and prisoners were put to work for these business interests. The system provided a major contribution to the rapid industrial development from the late 19th century.

That system remained pretty much in place until World War II led to a need for free labor for the war industry. Then followed a few decades of rapid and relatively egalitarian growth, with the state playing an even more critical role in economic development than before. A black man might get a decent job in a unionized factory, buy a house, send his children to college, along with other opportunities. The civil rights movement opened other doors, though in limited ways. One illustration was the fate of Martin Luther King’s efforts to confront northern racism and develop a movement of the poor, which was effectively blocked.

The neoliberal reaction that set in from the late ‘70s, escalating under Reagan and his successors, hit the poorest and most oppressed sectors of society even more than the large majority, who have suffered relative stagnation or decline while wealth accumulates in very few hands. Reagan’s drug war, deeply racist in conception and execution, initiated a new Jim Crow, Michelle Alexander’s apt term for the revived criminalization of black life, evident in the shocking incarceration rates and the devastating impact on black society.

Reality is of course more complex than any simple recapitulation, but this is, unfortunately, a reasonably accurate first approximation to one of the two founding crimes of American society, alongside of the expulsion or extermination of the indigenous nations and destruction of their complex and rich civilizations. . .

There is also a common variant of what has sometimes been called “intentional ignorance” of what it is inconvenient to know: “Yes, bad things happened in the past, but let us put all of that behind us and march on to a glorious future, all sharing equally in the rights and opportunities of citizenry.” The appalling statistics of today’s circumstances of African-American life can be confronted by other bitter residues of a shameful past, laments about black cultural inferiority, or worse, forgetting how our wealth and privilege was created in no small part by the centuries of torture and degradation of which we are the beneficiaries and they remain the victims. As for the very partial and hopelessly inadequate compensation that decency would require — that lies somewhere between the memory hole and anathema.
Posted by Ted McLaughlin at 12:02 AM