Support For GOP Plan To Privatize Medicare Is Small 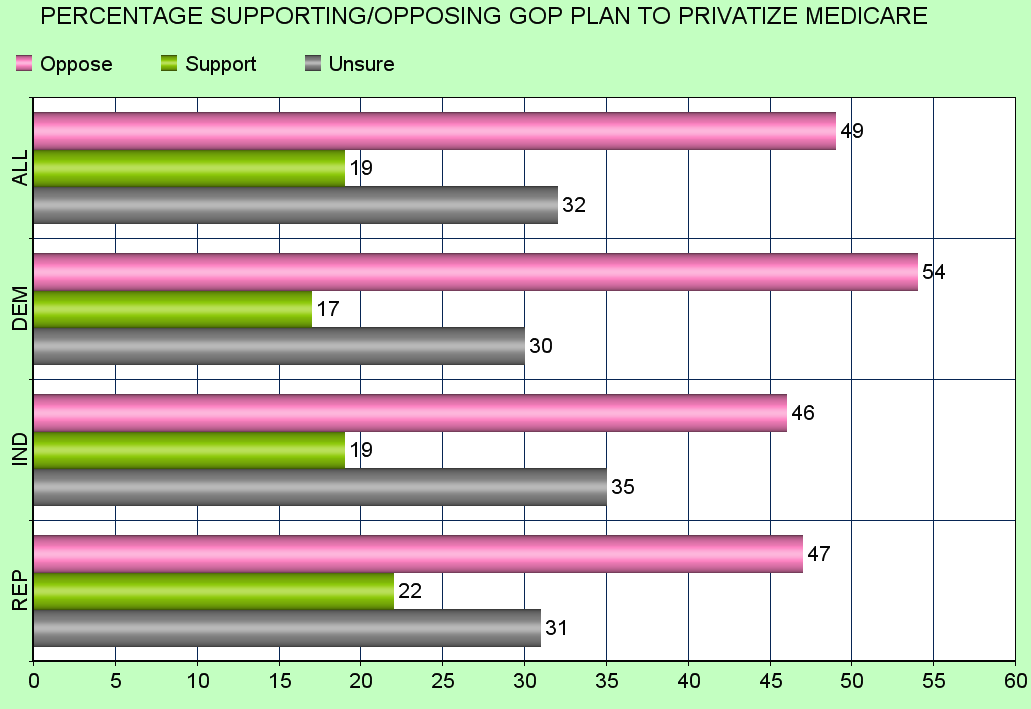 The Republicans in the House of Representatives recently released their proposed budget for 2016, and once again, it contains a measure that would effectively kill the current Medicare program.

They claim what they are offering is an improvement because it would offer seniors a "choice". The proposal would leave the current program as it is, but would offer a subsidy for those who want to buy a private insurance policy (and leave the Medicare program). To the brainless, this might sound reasonable -- but it isn't. It would mean the death of Medicare -- something the Republicans have been trying to achieve since the program started in the 1960's.

Seniors pay into the Medicare program to help finance it, and these payments come from their Social Security checks. And like other health insurance programs, Medicare is successful because all seniors are in it -- both the healthy and those with health problems. The program needs all of those people to survive.

If the rich and upper middle class seniors pull out of the program, and private insurance companies are able to cherry-pick the healthy among the rest, then the Medicare program will be left with only the poor and the unhealthy. And it cannot survive under those conditions. The Republicans know this -- it's why they are using this back-door method to attack the program (and kill it). Their purpose is not to improve health insurance for seniors. It is to get rid of Medicare -- a program that has worked well to provide health care for all American seniors.

Fortunately, it looks like the American public is not as dumb as Republicans think they are. They have not bought into the GOP lie that their privatization of Medicare is an improvement, and far more people oppose the Republican plan than support it. In fact, only 19% support the ridiculous plan -- and even among the GOP's own base, the support is only about 22%.

The GOP may well have bit off more than they can chew with this silly privatization plan. The American people like Medicare, and they don't want it dismantled.