Our Partisan Politics Is Dividing Us In Other Ways 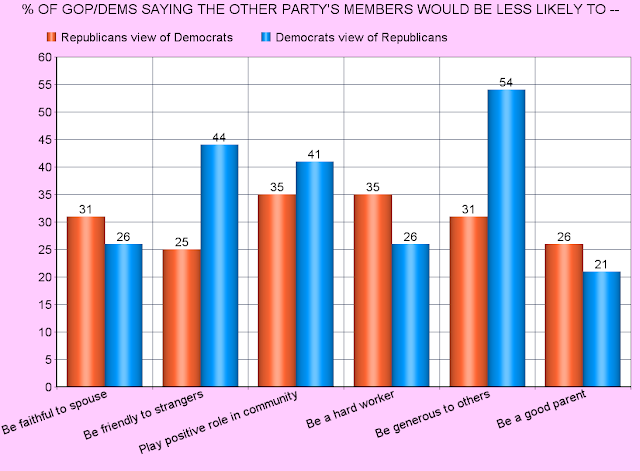 This chart was made from a recent YouGov Poll -- done between May 16th and 18th of a random national sample of 1,000 adults, and has a margin of error of 4.4 points. I found it a bit troubling.

It is obvious that Republicans and Democrats have different political views, and those views have become even more partisan in recent years. But is there really a difference outside of politics? Too many Democrats and Republicans believe there is.

This makes me think we are taking our partisanship too far. We are trying to apply it to qualities that simply are not true. I am a liberal Democrat (and proud of it), but I don't think my Republican friends (and yes, I do have some) are any less likely to be a good person than I am. We are all struggling to lives our lives as best as we can, and our political views don't make us any better or worse than anyone else.

Don't get me wrong. I think the liberal agenda that I believe in would be the best for most Americans. But outside of some of their disingenuous leaders, I think most Republicans also believe their views are the solution that would be best for this country. But neither of those beliefs make us bad people.

We need to rein in the partisanship. As Americans, we should be able to disagree on politics (and do our best to further our views) and still be friends -- respectful of each other.
Posted by Ted McLaughlin at 12:06 AM