Our Politicians Lack The Courage To Fix A National Tragedy 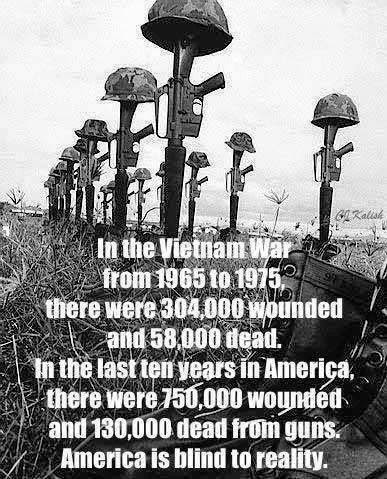 Even 40 years later, Americans consider Vietnam to be a tragedy. And they should. Far too many were wounded and killed in that war -- a war that never should have been fought by this country. We have even built a memorial to the brave soldiers who died in that conflict.

But Americans kill each other with guns in far larger numbers than the deaths and injuries of the Vietnam War. In the last 10 years, 750,000 Americans were wounded by guns (while 304,000 were wounded in Vietnam), and 130,000 were killed by guns (while 58,000 soldiers were killed in Vietnam) -- and that number has recently risen to about 30,000 gun deaths a year. Why is this not considered a national shame, and a tragedy worthy of action by our political representatives?

The answer of course, is that the gun manufacturers have a very effective lobbying organization -- the National Rifle Association (NRA). The NRA used to be an organization that promoted gun safety and reasonable regulation, but no more. Now the organization is just the propaganda arm of American gun manufacturers, and opposes any effort to reasonably regulate guns -- even efforts to keep guns from being sold to convicted criminals. They paint any responsible effort to do that as a government effort to confiscate guns from honest and responsible citizens.

That propaganda campaign isn't even remotely true, but it has been effective. The truth is that NO ONE -- not the president, not the Democrats, and not even most liberals -- want to take guns away from responsible and honest Americans (or prevent them from buying guns). What we do want is to make it as hard as possible for criminals (including convicted domestic abuser) and the dangerously mentally ill to buy a gun.

One way to do this, a way that is both constitutional and reasonable, is to close the loopholes in the background check law required of gun purchasers. About 40% of all gun sales in the United States are done without any background check at all. That is ridiculous, because it means that any criminal can legally purchase a gun anytime they want (without having to resort to the difficult and dangerous world of underground illegal gun sales). There is no legitimate excuse for allowing that.

Polls have shown that between 75% and 90% of the public would support closing the loopholes in the background check law. So why haven't our politicians acted to do what the public wants done? Because too many of them have sold out to the NRA for political donations, and too many more are afraid the NRA will spend large sums to defeat them on election day. In short, they are political cowards.

How many more massacres like that at Newtown (Connecticut) is it going to take to give our politicians some backbone? I shudder to think.
Posted by Ted McLaughlin at 12:06 AM