Guns Are Rarely Used For Self-Defense In The U.S. 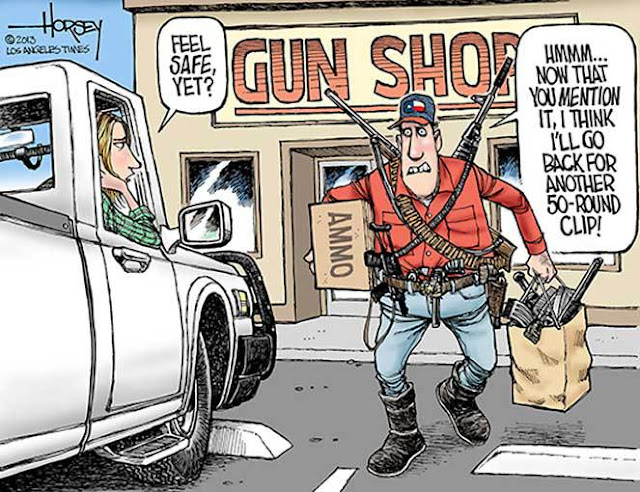 (Cartoon is by David Horsey in the Los Angeles Times.)

The sad fact is that when it comes to guns, our Congress is controlled by the NRA (through campaign donations, threats, and a pretty effective propaganda campaign). A majority of those in Congress have either been bought off, are afraid the NRA will support an opponent, or they actually believe the lies of the NRA. One of the biggest of those lies is that Americans need to own a gun to protect themselves.

But the fact is that by owning a gun a member of the household is far more likely to be injured or killed with the gun than a criminal. That's the opinion of the non-profit Violence Policy Center as reported by Yahoo News. Here's what they say:


Contrary to what the gun lobby argues, personal firearms in the United States are rarely used for self-defense, a gun control advocacy group said Wednesday.
In an analysis of FBI and other federal government data, the non-profit Violence Policy Center said Americans are far more likely to hurt themselves or others when handling a lethal weapon.
In 2012, it said, only 259 "justifiable homicides" involving a private citizen were reported, compared to 8,342 criminal homicides committed with a gun.
Put another way, for every justifiable homicide involving a gun, 32 criminal homicides carried out with a firearm occurred. And that does not take into account "tens of thousands" of gun-related suicides and unintentional shootings.
The influential National Rifle Association contends that "guns are necessary for self-defence," said Josh Sugarmann, executive director of the Violence Policy Center in Washington.
"But this gun industry propaganda has no basis in fact," he said in a statement.
"In fact, in a nation of more than 300 million firearms, it is striking how rarely guns are used in self-defense."
Now you may be telling yourself that while the number of self-defense cases is incredibly small, there are still some -- and taking guns away from Americans would prevent that. The problem with that argument is that no one is asking for guns to be taken away from law-abiding citizens, or that they be prohibited from buying a gun. All we are asking is to close the loopholes on the background check law -- so criminals and others too dangerous to own a gun cannot buy one legally. This is not an undue burden on law-abiding citizens, and has already been declared to be constitutional by the Supreme Court. It is time we got it done.
Posted by Ted McLaughlin at 12:02 AM