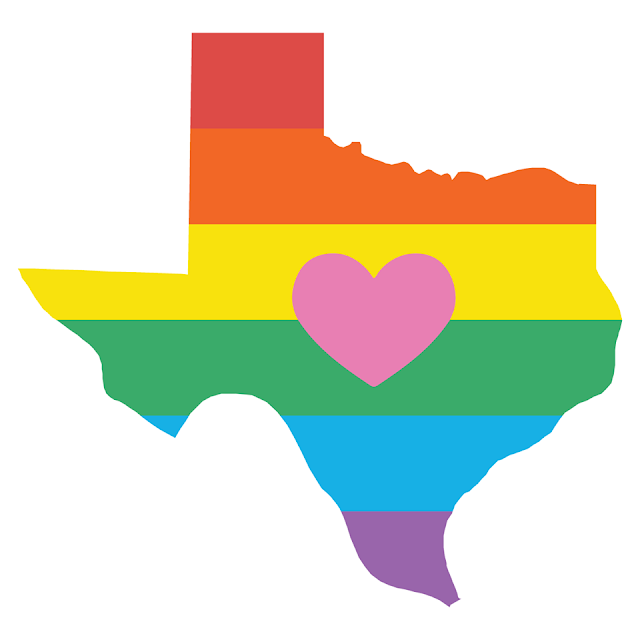 Same-sex marriages have been legal in the state of Texas for four days now -- since Justice Kennedy read his opinion last Friday. Some may think there is a waiting period before it goes into effect. That is not true. No stay was issued, which means the ruling went into effect immediately -- and any county clerk's office that refuses to issue a license is breaking the law (since they are required to issue all licenses that are legal, and same-sex marriages are legal everywhere in the United States).

At least one county has already got itself in trouble. Smith County Clerk Karen Phillips has already refused to issue a marriage license to a lesbian couple. Her excuse was that she didn't have the proper forms. She said the forms her office had still listed spaces for a man and a woman -- and that she would be breaking the law to alter those forms.

That, of course, was an outrageous lie. Shortly after the decision, the Texas Department of State Health Services put the new form online, and it was available to all 254 County Clerks in Texas. All they had to do was go online and download and print the new form. The form is available at

This county clerk has already had a lawsuit filed against her office -- and it is good, because she has violated the law. I suspect she was using the "forms excuse" as a delaying tactic, while hoping an opinion from the Texas Attorney General would allow her office to keep from issuing those licenses.
If so, she going to be disappointed. The Attorney General has issued his opinion, and it is not as all-compassing as some right-wingers had hoped. Her is the part of the opinion applying to County Clerks:

With this background in mind, the question is whether a clerk or a clerk's employees may refuse to issue a same-sex marriage license ifdoing so would violate their sincerely held religious beliefs. Such a question necessarily involves a variety of rights. The Supreme Court has now declared a right under the Fourteenth Amendment for same-sex couples to be married on the same terms as accorded to couples of the opposite sex. County clerks· and their employees possess constitutional and statutory rights protecting their freedom of religion.3 And employees possess rights under state and federal law to be free from employment discrimination on the basis of religion.4 The statutory rights protecting freedom ofreligion are known as the Religious Freedom Restoration Acts and require the government to use the least restrictive means to further a compelling government interest when substantially burdening a person's free exercise of religion.5 Employment discrimination laws further provide that an employer must make a reasonable accommodation for an individual's religious beliefs or exercise so long as the accommodation does not impose an undue hardship on the employer.6


A county clerk has a statutory right to delegate a duty to a deputy clerk, including the issuance of same-sex matTiage licenses that would violate the county clerk's sincerely held religious beliefs. Regarding deputy clerks and other employees, state and federal employment laws allow them to seek reasonable accommodation for a religious objection to issuing same-sex marriage licenses. And under the Religious Freedom Restoration Acts, deputy clerks and other employees may have a claim that forcing the employee to issue same-sex marriage licenses over their religious objections is not the government's least restrictive means of ensuring a marriage license is issued, particularly when available alternatives would not impose an undue burden on the individuals seeking a license. See Slater v. Douglas Cnty., 743 F. Supp. 2d 1188, 1192-95 (D. Or. 2010) (refusing to grant summary judgment to a county that only offered to reassign an employee of a county clerk who refused on religious grounds to issue same-sex domestic partnership registrations rather than accommodating her request to not issue the registrations). Importantly, the strength of any claim under employment laws or the Religious Freedom Restoration Acts depends on the particular facts o f each case.

Courts have balanced similar competing rights in other contexts, and I believe they would likely do so here.7 See, e.g., Stormans Inc. v. Selecky, 844 F. Supp. 2d 1172, 1188-93 (W.D. Wash. 2012) (holding that a state law mandating the issuance of drugs violated pharmacists' religious beliefs, and that refusing to issue the drugs and referring to another pharmacist was a sufficient practice); Brady v. Dean, 790 A.2d 428, 435 (Vt. 2001) (holding that a town clerk appointing an assistant clerk to issue same-sex marriage licenses did not impose a substantial burden on the town clerk's religious beliefs).

I f instead, a county clerk chooses to issue no marriage licenses at all, it raises at least two questions. First, a clerk opting to issue no licenses at all may find himself or herself in tension with the requirement under state law that a clerk "shall" issue marriage licenses to conforming applications. TEX. FAM. CODE ANN.§ 2.008(a) (West 2006). A court must balance this statutory duty against the clerk's constitutional rights as well as statutory rights under the Religious Freedom Restoration Acts. Second, a court must also weigh the constitutional right ofthe applicant to obtain a same-sex marriage license. Such a factually specific inquiry is beyond the scope of what this opinion can answer.

In short, county clerks and their employees retain religious freedoms that may provide for certain accommodations of their religious objections to issuing same-sex marriage licenses--or issuing licenses at all, but the strength of any particular accommodation claim depends upon the facts.


This does NOT give County Clerks offices the right to deny same-sex marriage licenses. It says that individual clerks may refuse to issue a license (quoting a religious exemption), but someone in that office must issue the license. There is little doubt that forcing a couple to go to another county would be considered an undue burden by any federal court.

This is NOT a blanket immunity. The office must issue all legal licenses, or they are violating the law. If there is no one in the office who will issue the license (due to all clerks claiming a religious exemption), then that office had better hire someone quickly who will issue the licenses. Failure to do so is a violation of both state and federal law.
Posted by Ted McLaughlin at 12:02 AM