Trump Has Tapped Into The GOP Base's "Anger" Voters 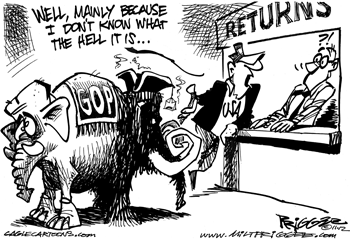 (This cartoon is by Milt Priggee at miltpriggee.com.)

These are mostly White people -- and what they are most angry about is the fact that the inherent privilege they enjoyed as Whites is beginning to disappear. They have no solutions for their perceived problems -- just an overwhelming anger, and they vote that anger (even when it is truly not in their best economic interests).

Many were surprised when Donald Trump entered the Republican race for the nomination, and began to climb up in the polls after expressing some rather hateful views, but we shouldn't have been. What he did was to tap into the lingering anger of the teabagger base of the Republican Party. He has given their anger a voice and a face -- and he has given them hope that maybe they could return to an America where White men ruled the roost (and didn't have to share rights and economic opportunity with others).

The America they dream about is gone forever, but that just increases their anger. And we can be sure they will express that anger in the coming Republican primaries. Will they be able to elect a candidate who expresses their anger -- or at least push the GOP winner so far to the right that he will be hurt in the general election? That is the current fear of GOP leaders, and it is a definite possibility. They are afraid because they know that this anger does not represent the huge majority of voters who will show up for the general election in November of 2016.

And now they are faced with an even greater fear -- that Trump, after failing to win the nomination, will bolt from the party and run as an independent, taking many of these anger voters with him. They have a right to be afraid. Trump, and these anger voters, pose a problem for them -- a big problem.
Posted by Ted McLaughlin at 12:06 AM