Will The Trump/McCain Fiasco Hurt The GOP ? 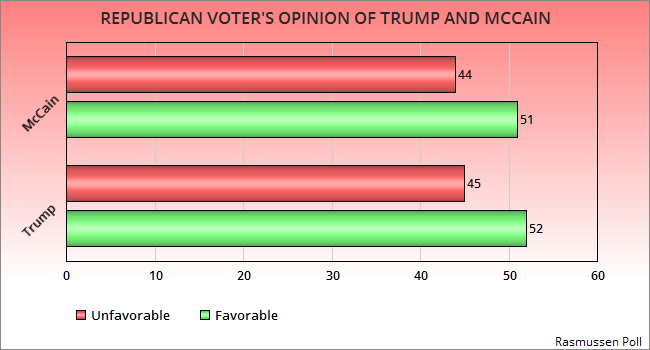 Donald Trump, the reality-TV star candidate for the GOP nomination, recently suggested that republican Senator John McCain was not a war hero. He backed that up only slightly by saying that McCain was a hero only because he was captured during the Vietnam War, and that he preferred people who weren't captured.

This has sparked outrage from many of the other Republican presidential candidates. They quickly rose to the defense of McCain, and berated Trump for suggesting he is not a hero. For his part, Trump has refused to back down. This poses the question -- what do the Republican voters think? Do they agree with Trump, or do they consider McCain to be a hero?

But the results were much different among Republican voters (as shown in the chart above). The results among Republicans are a tie (with results being well within the survey's margin of error). Trump is viewed favorably by 52% and McCain by 51%. The unfavorable views are very similar also -- with Trump getting 45% and McCain 44%.

Viewing those results, I have to ask -- is Trump dividing the Republican Party? Is his candidacy going to be more divisive of Republicans than unifying? A case can certainly be made for that. But there is something else that should scare the hell out of Republican leaders. Trump has refused to say whether he would support the eventual nominee of the party (and the recent remarks he's made against other candidate would suggest he might not), or whether he would launch an independent bid if denied the GOP nomination. And if he leaves the party, how many voters will follow him?

Say what you will about Donald Trump, but his clownish candidacy has made this race for the 2016 presidency a lot more interesting.
Posted by Ted McLaughlin at 12:06 AM