Majority Of Republicans Say Trump Is The Likely Nominee 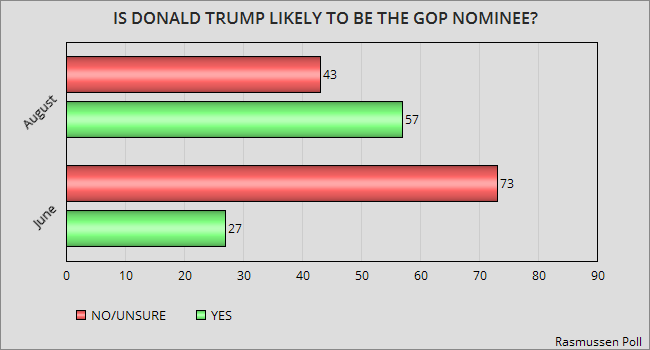 When Donald Trump tossed his wig into the ring a couple of months ago, announcing his candidacy for the GOP presidential nomination, most political pundits considered it to be little more than a joke. And most Republicans didn't take his candidacy seriously either. In June, only slightly more than one out of four Republicans (27%) considered it likely he could win the nomination (and only 9% said it was very likely).

I still am not convinced that Trump will be the GOP nominee, but he can no longer be ignored. He's a serious candidate who's in it for the long haul.

This chart was made from a new Rasmussen Poll -- done on August 19th and 20th of a national sample of 1,000 likely voters, with a 3 point margin of error.
Posted by Ted McLaughlin at 12:02 AM