43% Of GOP Say They Could Support A U.S. Military Coup 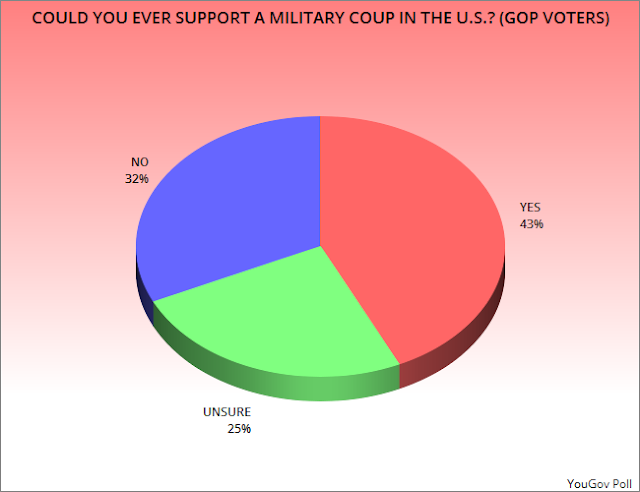 The United States has one of the most stable governments in  the world. There has never been a military coup (a takeover of the government by the military) -- and most Americans would be horrified at the prospect that it could ever happen.

But if you have any doubt as to how extremist the Republican Party has become, the chart above should settle that doubt (and it should scare the hell out of you). About 43% (or more than 4 out of 10) Republicans say they could envision a situation where they would support a military takeover of the United States government. Another 25% say they are sure whether they could support that or not. Only 32% (slightly less than a third) of Republicans say they could never support a military coup.

Supporting a military coup is right-wing extremism at its worst -- and it's something that no American should even consider supporting. The very idea of it is traitorous. But that's where the Republican Party is these days. It's their way or the highway, and compromise is no longer an option for them (which they have clearly demonstrated during the terms of President Obama).

The modern Republican Party is an extremist party -- one willing to trash our democracy to see that their "values" trump the wishes of the majority. There's simply no other way to put it.

The chart above represents a result from the recent YouGov Poll -- done on September 2nd and 3rd of a random national sample of 1,000 adults, with a margin of error of 4 points.
Posted by Ted McLaughlin at 12:06 AM