Most Democrats Are Satisfied With Current Field (W/O Biden) 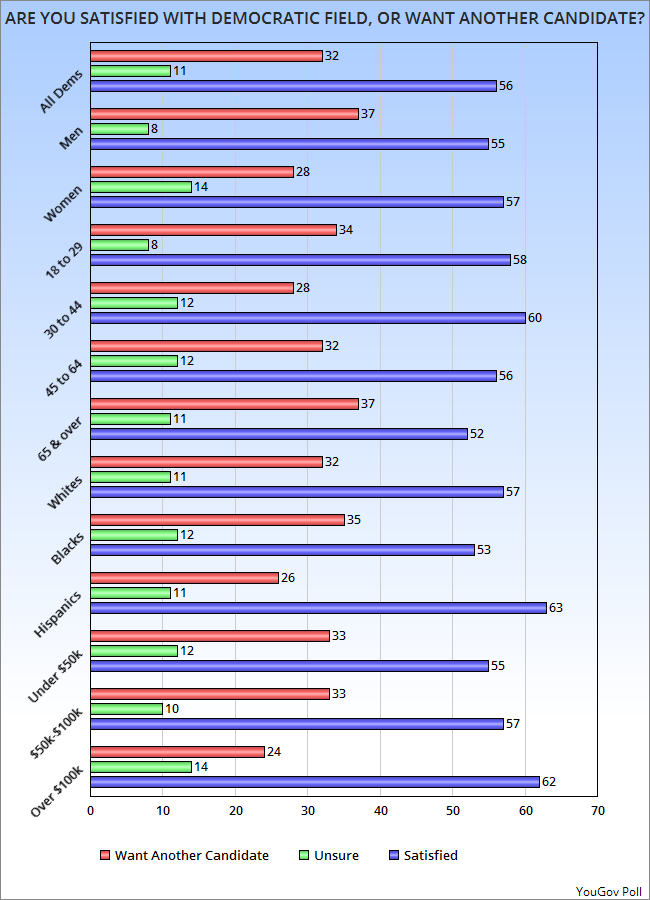 There are some who have been encouraging Joe Bien to enter the race for the Democratic nomination for president. It's coming mostly from some die-hard Biden fans, and has been promoted by the mainstream media, who want a closer race to improve their own ratings. But the question is -- what do rank-and-file Democrats want?

A YouGov Poll (done of Democrats between September 11th and 15th) answers that question. Most Democrats (56%) are satisfied with their field of candidates right now, and see no reason for another candidate to get in the race. Only 32% would like Biden to be a candidate. And this same survey shows Biden with only 19% support -- 26 points behind Clinton and 6 points behind Sanders.

Note also that a majority of every demographic group say they are satisfied with the field of candidates as it is.

I could be wrong, but I still don't see Biden tossing his hat in the ring. I think he'll only run if he sees a path to victory -- and right now, that just doesn't exist. He simply doesn't need another failed presidential campaign at this point in his illustrious career. Biden has served his party and his country well, but he should stay out of this race.
Posted by Ted McLaughlin at 12:06 AM