Police Officers Do NOT Have The Most Dangerous Jobs 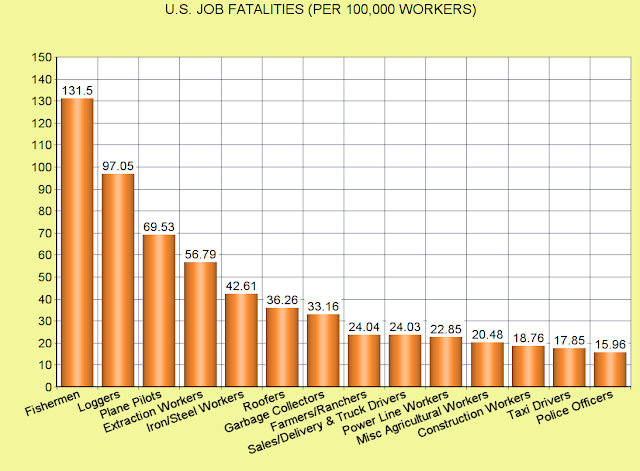 The recent shooting deaths of police officers (in Texas and Illinois) has been all over cable news in the last few days, and those media outlets are leaving many Americans with a mistaken opinion -- that being a police officer is the most dangerous job in this country. Most of the cable news talking heads have inferred that, and some have just come right out and said it -- but it is NOT TRUE.

The chart above is from Bloomberg Business News (certainly no bastion of liberal thinking). It shows the fatalities per 100,000 workers of different jobs in this country. Note that being a police officer ranks only 14th on the list -- and many jobs, done by millions of ordinary Americans, are far more likely to cause a worker's death than being a police officer.

Don't get me wrong. I spent nearly 30 years working in various aspects of law enforcement, and I know there is some danger to the job. But it is far from being the most dangerous job in the United States  -- and I suspect that anyone who tells you that is probably trying to cover up for the police misconduct that has been recently revealed.

Those same outlets are also giving the impression that the danger to police officers is rising in this country. That is also false. The chart below is from information provided by the National Law Enforcement Memorial Fund. It shows that police deaths, while they vary from year to year, are generally going down -- and 2015 looks like it will not be an exception, but will fall within the normal curve.

The police in this country do a tough job that is vital to the safety and security of American citizens, and during my career I knew many officers that do that job very well. But there are bad apples in every department, and too many departments with weak leadership that tries to cover-up for those bad apples. We should appreciate the good police men and women, but it would be a mistake to put all police on a pedestal. There are problems with many police departments in this country (especially in the way they treat minorities) -- and we must address those problems and cure them.

Equality is not an impossible dream. We must make it a reality. 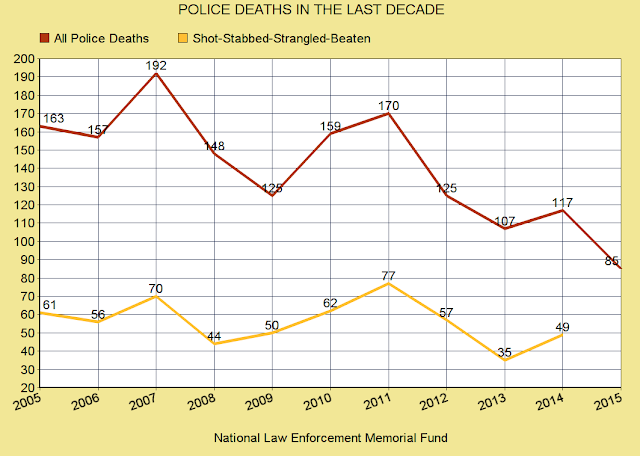