The "Recovery" Has Still Not Reached Middle-Class Workers 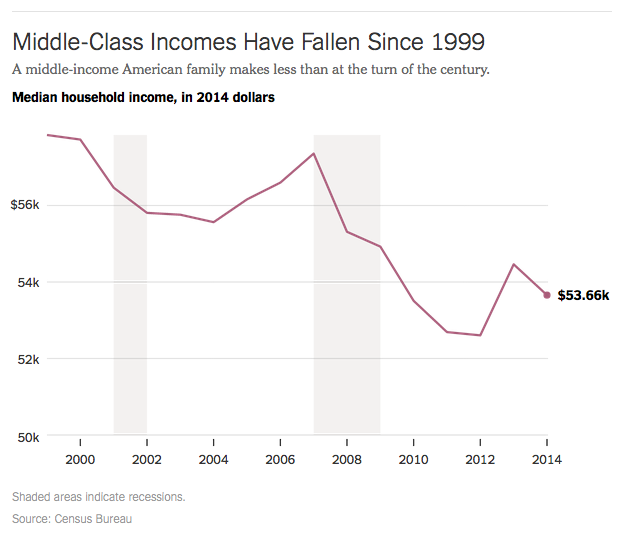 We are supposedly six or seven years into our economic recovery from the Bush Recession. That supposed recovery has been good for some, but not for others. The recovery has been great for the rich and the corporations. They are making more money than ever -- record-breaking amounts. It has not been so good for the poor. Many are still jobless, and those with a job are making low wages (which are being eaten up by inflation -- and those who can't work are having their benefits cut repeatedly by a Republican-controlled Congress.

That leaves the middle-class workers. Have they recovered? The short answer is NO. Look at the chart above. It shows that middle-class incomes are still below what they were before the Bush Recession (although they have slightly recovered)  The 2014 median income is 6.5% below what it was in 2007 -- before the recession. How is this possible, since the economy seems to be growing?

It is possible because, thanks to the Republican-imposed policies of "trickle-down", unions are still losing power and the rich corporate executives are hoarding almost all of increased productivity -- about 95% of it.

And things are not improving. The median income in 2014 was 1.5% below what it was in 2013. Is it any wonder that the middle-class is shrinking? Sadly, things are not likely to change as long as the Republicans control Congress (and would get much worse if they won the White House), because they seem to think that the rich and corporate moguls are the only people deserving of an increasing income.

This next election is important -- if only to dump the failed GOP "trickle-down" policy, and institute a fairer economic policy that will benefit all Americans.
Posted by Ted McLaughlin at 12:06 AM