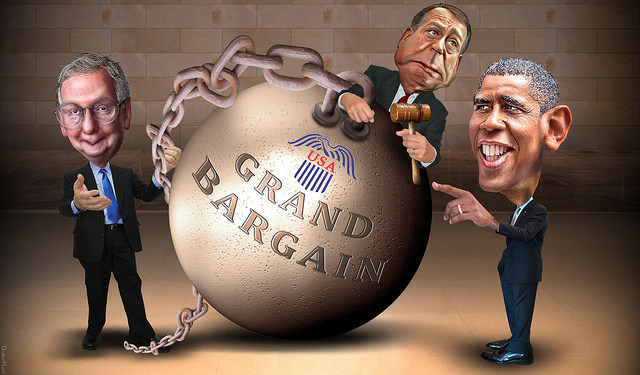 The caricature above, by DonkeyHotey, is of the primary architects of the new budget (and debt ceiling bill) -- but I believe one played a more important part than the others. That person is John Boehner. I haven't had many good things to say about Speaker Boehner in the last two years, but I believe he stepped up in the "lame duck" days of his speakership and did something a lot of his Republican cohorts are loathe to do -- he compromised for the good of the country.

Boehner could have set back and let the new Speaker (Paul Ryan) deal with the debt ceiling and budget, and that would either have resulted in problems for Ryan or a shutdown of the federal government (following a default). He didn't do that. He tossed the "Hastert Rule" out the window (which said no bill could come to the House floor without majority Republican support), and reached out to House Democrats to help him pass the new budget.

And he did get it passed -- on a 266 to 167 vote (where 79 Republicans joined 187 Democrats to approve the budget bill, while all 167 "no" votes came from Republicans. In getting the bill to the floor and passed, Boehner also accomplished some other things. He gave Paul Ryan time to establish himself as Speaker before taking on issues as tough as the debt ceiling and budget. He saved his party from being blamed for a government shutdown in the next election. And he gave one last poke in the eye to the Freedom caucus (i.e., teabagger reps) -- the group responsible for his ouster. I suspect he may have especially enjoyed the latter.

Is this a good budget bill? No. But it is probably the best compromise that could be accomplished, and it's a lot better than I thought could be done. Neither side is happy with the bill, and both sides get some of what they wanted -- and that probably means it's a good compromise. The Democrats get an additional $80 billion in the bill, and the Republicans get to spend half of that $80 billion on defense (with most probably going to corporations in the military-industrial complex).

I think kudos are also in order for President Obama -- who was willing to compromise, but stood firm on rejecting an austerity budget from the Republicans. Thanks to President Obama (and Speaker Boehner), we now have a budget bill that is not perfect, but is one both sides can live with -- and that's a pretty remarkable accomplishment.

The bill must now be approved by the Senate, and Rand Paul has already said he will filibuster it. But Majority Leader McConnell doesn't want a shutdown (which is the alternative to passing this bill), and I don't think he'll have any trouble getting the 60 votes needed to end that filibuster.
Posted by Ted McLaughlin at 12:06 AM