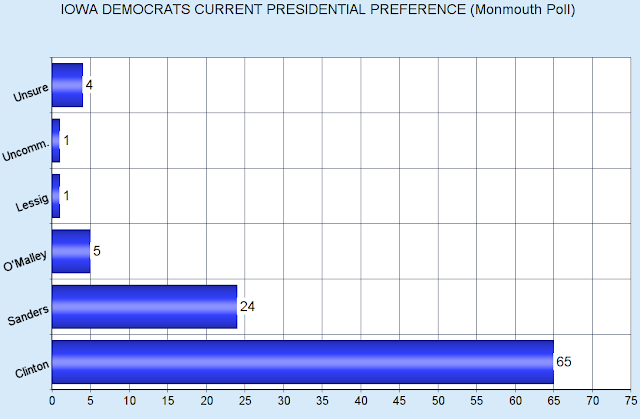 Yesterday, I showed you the Monmouth University Poll for Iowa Republicans -- which showed that Carson is besting Trump in that state. Now Monmouth has released the survey of Iowa Democrats. It was done between October 22nd and 25th of a random sample of 400 voters likely to attend an Iowa Democratic caucus, and has a 4.9 point margin of error.

The poll shows Hillary Clinton with a solid lead in Iowa. That was no surprise. The surprise was the size of the lead she has over Bernie Sanders -- about 41 points (65% to 24%). Clinton has had a very good month, but I didn't expect it had been this good!

I don't know if her lead is really this large, but it does seem to verify that Iowa is solidly back in the Clinton column.
Posted by Ted McLaughlin at 12:04 AM